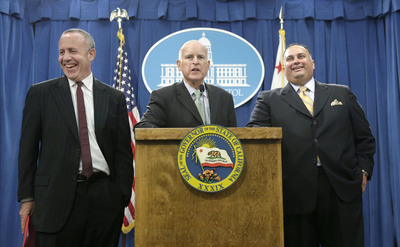 No question that the Cap & Trade trailer bill on Governor Brown’s desk is good news, because it signifies the state is getting back into the business of funding transit, albeit it at a lower level than we'd hoped and lower than had been proposed -- 15% instead of 25% -- by outgoing Senate President Darrell Steinberg (D-Sacramento)and incoming Senate President Kevin De Leon (D-Los Angeles).

That 15%, however, could amount to $750 million a year for transit capital and operations, and the trailer bill allocates another 10% of revenues to building transit ridership through the construction of affordable housing near transit, and 10% to transit-oriented development, active transportation, and other “sustainable communities” strategies.

That means that 35% of Cap & Trade funding – a pot that’s expected to increase from $872 million this year to $3 to $5 billion by 2020 – would be available for transit and for sustainable community development that supports transit. Governor Brown still has to sign the bill, but he has indicated that he will.

"Cap & Trade is a program that will be continued for years -- even decades -- and this is an impressive first take on a funding program," says Move LA Executive Director Denny Zane. "But there should be a stronger commitment to transit and to bike and pedestrian infrastructure as well as specific programs like a universal student transit pass in order to achieve the robust greenhouse gas reductions we will need."

There's also 25% for high-speed rail, and the remaining 40% will go to energy efficiency; to natural resources, urban forestry and waste diversion; and to low-carbon transportation and cleaning up cars, trucks and buses on California's roads.

It’s possible there could be a little more money for transit-related improvements. Urban forestry is a spending priority in the natural resources category, and one could imagine this money being used for landscaping along the City of LA’s “Great Streets” and “People Streets” programs as well as the countywide “Grand Boulevards” program that has been proposed by Move LA for inclusion in Measure R2 – the proposed new sales tax measure for transportation that could go on the ballot in 2016.

Steinberg (that's Steinberg standing with Governor Brown and Assembly Speaker John Perez in the photo) told reporters in the Capitol Sunday that there’s a lot to be proud of in the 2014-15 state budget: “There’s an unprecedented investment in transit and in housing,” he said. “While high-speed rail gets all the attention there’s an even greater investment in urban and commuter rail and in housing that’s going to make the high-speed rail project even better because high-speed rail will be part of a system – and doesn’t just stick out there like a sore thumb.”
Uncategorized archives
Do you like this post?
Tweet
Tweets by @MoveLATransit