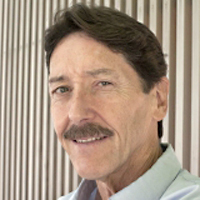 UC-Berkeley Professor Robert Cervero is a consummate authority on how to transform cities with transit – in fact it’s the title of his new book, out later this year. He’d written four books about transit and transit-oriented development, or TOD, before this topic was on anyone’s agenda. And he’s celebrated the public-private partnerships created around transit in places like Hong Kong, where development activity from the sale of leases and air rights around stations generates significant revenues that are reinvested in transit and other neighborhood improvements.

Professor Cervero directs the UC Transportation Center and the Institute of Urban and Regional Development at UC Berkeley, and he’s been a consultant to governments all around the world — from India to Saudia Arabia to Colombia and Korea — and has worked with partners including the U.N. and the World Bank. And now he is working with the City of Los Angeles, where he is co-author of a report that is the foundational document for Mayor Antonio Villaraigosa’s new Transit Corridors Cabinet.

This cabinet has been meeting for about a year with stakeholders and is composed of eight city departments that exercise control over some aspect of transportation corridors and the neighborhoods around them — including walkability and bikeability, affordable housing, permitting, density, parking, street design guidelines, etc. The idea is to coordinate communication and cooperation among these departments in order to focus on neighborhoods where changes will be occurring during then next decade because of the Measure R-funded expansion of the rail system, which will double in size by 2039 from 120 miles and 103 stations to 236 miles and 200 stations.

This public investment in transit will create tremendous land and property values in neighborhoods where the real estate market is active, and the actions of these departments will help orchestrate this value creation and then capture some of it to pay for improvements in neighborhoods. The Transit Corridors Cabinet is less focused on development, density or ridership, however, than on providing residents and workers with more choices and more opportunities as elemental as making it easier to walk to a business lunch or a yoga class or a job at a local business.

The Cervero study finds that for LA to become more transit-oriented, the city will need to “take thousands of actions that are coordinated with many other players according to a ‘game plan’ that evolves with dynamic markets, changing political winds, and the availability of resources.” The cabinet has already come up with no less than 174 “tactics” to bring this about, ranging from facilitating “Eco-pass” programs such as one in Denver that provides transit passes to all the people who live around stations, to developing targets for building affordable housing along transit corridors.

Cervero is not a stranger to LA, though he hasn’t spent time here lately. He worked in LA in the 1970s as a senior transportation planner for the Southern California Association of Governments (SCAG) while also working on his PhD at UCLA. He seems amused to be back in LA and working with LA’s “Transit Mayor,” since when he was working for SCAG in the '70s he often speculated whether it might not be too late to save Los Angeles from the fate of being forever car-dependent. “I wondered back then whether it was still possible to turn this place around,” he told Move LA's Gloria Ohland, “and whether it wasn’t too late to invest in a transit system.”

He says he's impressed with the strides that have been made with Measure R, aided and abetted by demographic trends, lifestyle choices, oil prices, concerns about public health and the changing climate — all trends that favor public transit use. When he lectures around the world he finds that other cities are increasingly interested in Los Angeles, and how the city — for so long known as a place where you must have a drivers license — has been able to bring about these changes.

He thinks the city is being very smart about focusing on transit corridors as an organizational framework for thinking about how to reorient and redevelop the city and its neighborhoods around a truly multimodal transportation system. “Most cities are very focused only on improving and investing in the areas around stations, when in fact the transit corridor is the scale at which you can generate the most energy and synergy.”

He cites Arlington County’s Rosslyn Ballston corridor just across the Potomac from Washington DC as the best U.S. example: “The mixing of compact, highly walkable development of all types — housing, offices, shops, hotels — among the county's five closely-spaced stations has attracted riders heading in both directions during the peak period.  Stations are vibrant and active, with people getting both on and off trains and quickly filtering into the surrounding buildings and neighborhood. This is a product of corridor-level  planning that created great synergies among a cluster of stations.”

It’s unfortunate, he says, that LA has for so long been a battleground between the car and transit on the one hand, and bus and rail on the other, when in fact “it’s not an either/or question. These are false dichotomies. These separate modes need to be integrated, right down to their fare systems and their schedules.” He thinks LA is very close to developing a truly multimodal system that’s about transit, the car, bikes, walking and “destination stations” that also offer bike-sharing and car-sharing that can also become smart mobility hubs. These hubs offer an array of transportation choices that can be accessed with cell phone apps allowing transit users to instantly rent a bike or car, carpool with someone just a mile up the road, or even “ping a ride” with a car service or cab.

“Build it and they will come. LA may not be able to build transit lines to every neighborhood – the county is just too big and too dense – but the bike to transit phenomenon is big and getting bigger. And if you can increase the bike access shed to stations by building bike boulevards and other improvements that make it easier to ride to transit you will induce even more ridership and make the system even more effective and important,” says Cervero.

Cervero joins California Senate Pro Tem Darrell Steinberg, the Transit Corridors Cabinet, and the leaders of Move LA's business-labor-environmental-civic-community coalition at our 5th annual "transportation conversation." See links to program and registration on the homepage.
Uncategorized archives
Do you like this post?
Tweet
Tweets by @MoveLATransit