posted by gloria ohland | 500mp
April 01, 2014
Move LA Executive Director Denny Zane told the LA Times he is concerned that a City of LA proposal for a half-cent sales tax to repair city streets will jeopardize support for a  proposal for a countywide sales tax increase for transportation projects. LA City 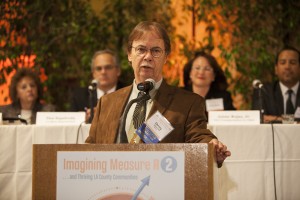 Administrator Miguel Santana has said that a tax increase on the November ballot is the only way the city can afford to repair streets and sidewalks. But Denny worries it could undermine support for the countywide sales tax, likely to go on the ballot in 2016, which would require a 2/3 majority to pass.

"When you need a 2/3 vote," to pass a transportation measure, Denny told the Times, "you don't really start out with any margin for error." The Times story also quoted LA County Supervisor Mark Ridley Thomas, who said the transportation tax measure would offer greater regional benefits and also attract more federal funding than a city tax. "If you're trying to ask the question, where do you get the biggest bang for your buck, then the argument swings pretty forcefully toward" a higher countywide transit tax, he said.