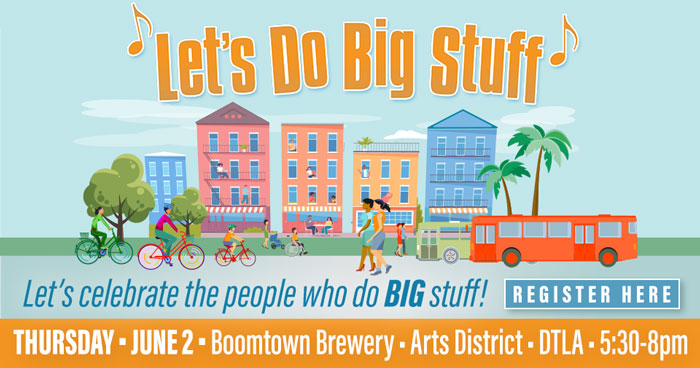 Join us and the people who do BIG STUFF on Thurs., June 2!

Join us and Asm. Holden Tuesday 3/22 to hear about his NEW fare-free transit pass program !

We have exciting news—Asm. Chris Holden of Pasadena, Chair of the Appropriations Committee and long-time advocate for student transit passes, has introduced AB 1919—the California Youth Transit Pass Program! 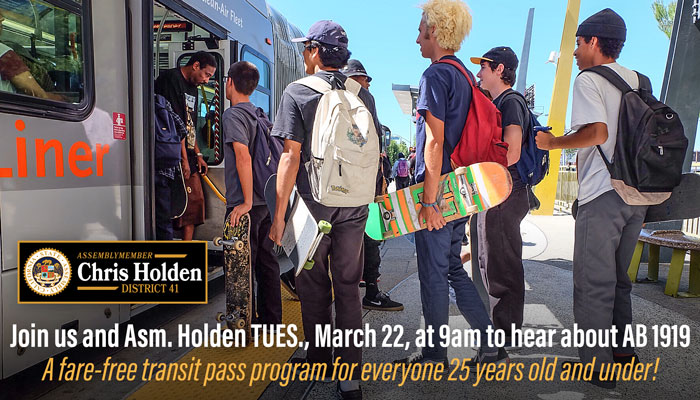 This program would provide fare-free transit passes for everyone 25 years old and under who is living in California, regardless of immigration status. The goal is to remove socioeconomic barriers to reliable transportation and make it easier for students to get to school and work and other activities, meantime reducing absenteeism and greenhouse gas emissions and increasing access to opportunity and quality of life!

And we encourage you to register here to automatically track the bill and any amendments—we expect one this week that will create a reimbursement scheme for transit agencies—and it will enable you to know when committee hearings are scheduled.

Again RSVP for the AB 1919 Coalition Launch Zoom this Tuesday, March 22, at 9am when we will be joined by the bill author, Asm. Holden!

California has a massive budget surplus this year—thanks in part to Silicon Valley, the stock market, and the state's progressive income tax—and the $1.2 trillion federal infrastructure bill will provide the state with even more funding.

We believe a significant share of this windfall should become flexible funding for public transit including service and operations, because transit agencies are struggling as a result of the pandemic and the subsequent loss of ridership, farebox revenues, bus drivers and other transit workers—and they're cutting back service as a result. Click the graphic above to join us and our partners in this budget ask.

What is this new national movement for transit justice?

Most of us understand that the U.S. has made inadequate investments in transit and the transit workforce for decades—even the Bipartisan Infrastructure Bill has maintained the old 80-20 funding split with the big money going to highways. In the meantime low-income riders and transit workers have been bearing the brunt of fare hikes, service cuts and shutdowns due to COVID. 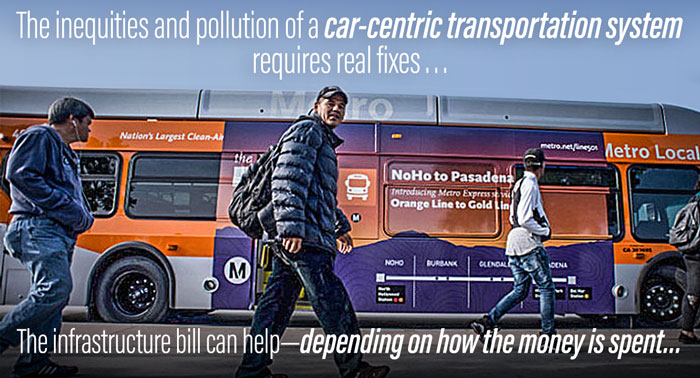 Will billions in infrastructure funding for highways worsen climate change?

That was the headline in The New York Times earlier this week, and it's a big and very real concern because the Bipartisan Infrastructure Law gives states $273 billion for highways over five years with few strings attached. And, the Times wrote: "there are signs that even states with ambitious climate goals, like Washington, Illinois and Nevada hope to use federal funds to expand roadways..."

What is California is going to do with all that money? And how can we ensure funding will be used to reduce vehicle miles traveled and greenhouse gas emissions? Join us to hear what our panel of experts say:

Join Move LA Feb 16: What does the infrastructure bill mean for SoCal?

The Bipartisan Infrastructure Bill (once known as the Infrastructure Investments and Jobs Act, or IIJA) is, as you probably know, a very big deal: Much has been written about how it’s the largest-ever 5-year surface transportation reauthorization—and about half the $1.2 trillion package will be spent on transportation. Some of the other investments include providing better access to clean drinking water and high-speed internet, upgrading our power and energy infrastructure, capping oil and gas wells, and much more.

Move LA honors the legacy of Rosa Parks on Transit Equity Day—transit is important for so many people!

Move LA is joining the Labor Network for Sustainability and many others today on Transit Equity Day—and we urge you to join us—in celebrating the courage of Rosa Parks and her legacy. Like many other organizations across the U.S. we are doing this out of concern about transit agency staffing challenges as well as service cuts.

When transit funding is cut, buses and trains don't show up when expected or don't show up at all. That means a lot of families can't get to work or school on time, or honor other commitments. We must remember that public transit is a lifeline for so many people—not only in LA but across the U.S.

Moreover, investing in the transit workforce and expanded transit service provides important alternatives to driving, which is so important now given concerns about climate change. Moreover so many people in LA depend on transit and when bus service is reduced, life becomes so much more difficult.

A new report released today by the Alliance for a Just Society, Labor Network for Sustainability, and the TransitCenter discusses the inadequacy of our investments in public transit and in transit job quality, and the degree to which the COVID-19 pandemic has reduced staffing levels so that public transit can't meet the needs of many riders.

In Los Angeles, for example, the need for public transit workers has already led to 12% temporary cuts to Metro service, and Metro canceled 42% of trips on the heavily trafficked Vermont Rapid Bus during December and January, leaving riders unable to get to where they need to go.

We must remember that millions of people in Los Angeles rely on public transit every day. And if  teachers, nurses, grocery store clerks, and other frontline workers can’t get to where they need to be that’s a problem for all of us.

We have to invest in robust public transit and in our public transit workforce if we want to build an economically resilient and racially equitable Los Angeles. We urge our local leaders to use the federal investment from the bipartisan infrastructure bill to address this growing crisis.

Read and share the full report and join Move LA as we recognize #TransitEquityDay!

And the winner is . . . Eli Lipmen and our partners!

Move LA's Eli Lipmen was on a roll this year working at the national, state and local levels, and his work was acknowledged by both the TransitCenter and The Mobility Fund, which decided to help fund this work. 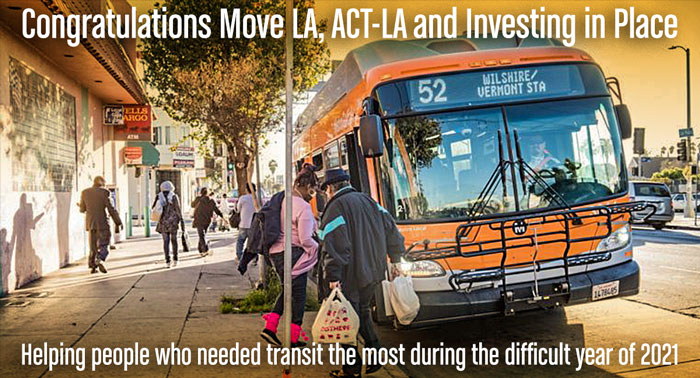 The TransitCenter is a NYC-based foundation that works to improve transit in cities across the U.S., and The Mobility Fund is a project of the Global Philanthropy Partnership and supports community-based advocacy to increase access to and the use of transit and active transportation.

First, Eli worked with the TransitCenter and other advocacy groups across the U.S. to move the Bipartisan Infrastructure Bill forward, discussing its importance with dozens of members of Congress. Congress passed and President Biden signed the bill.

Acknowledging this work, the TransitCenter presented Eli with their "Think Globally, Act Locally" award because during the pandemic, they wrote, he'd "been a key voice combining insight and action at the local, state, and federal levels." He was also recognized for his organizing work on the Transit Justice National Campaign and on "local campaigns to ensure that public transit continues to serve riders." 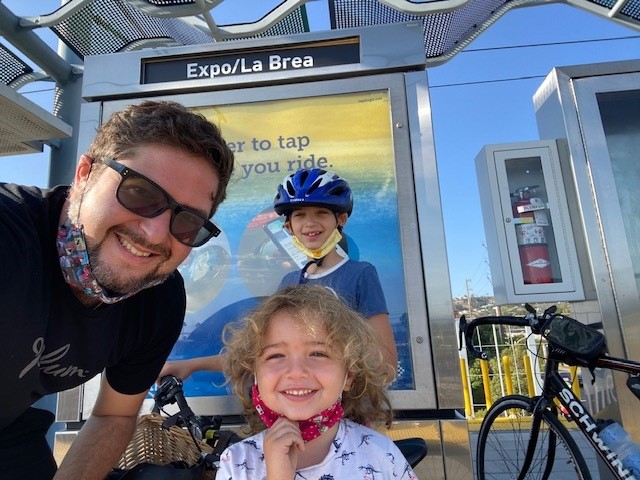 Eli (pictured with his kids riding on the 'E' Line) also won the TransitCenter's "Best Local Campaign" award, along with long-time Move LA partners ACT-LA, Investing in Place and a coalition of more than 20 other LA advocacy groups, after they together won a commitment from LA Metro to restore bus service to pre-pandemic levels.

Service cuts at the beginning of the pandemic meant essential workers were putting up with long waits and unpredictable bus arrival times. When Metro received billions of dollars in funding from the federal CARES Act (Coronavirus Aid, Relief, and Economic Security Act) and CRRSSA Act (Coronavirus Response and Relief Supplemental Appropriations Act), advocacy groups brought so much pressure to bear that the Metro board voted to spend some of its money improving service.

The TransitCenter wrote this was "a testament to the success of years of organizing for better bus service in the region, which led to the ability to mobilize quickly and effectively at the right moment."

Congratulations to our long-time partners ACT-LA and Investing in Place, as their organizing ability was also key to this success.

Unfortunately, once again, there are complaints about long waits and unpredictable service as Metro began collecting fares and Omicron surges, and Move LA is working with advocates and the Metro Board to leverage federal and state resources to prioritize the restoration and expansion of LA Metro bus service. This is where the Mobility Fund's support will be crucial, as well as supporting oversight on the implementation of Metro's Fareless System Initiative.

Move LA will also be working with the South LA Promise Zone (SLATE-Z) to advocate for capital projects that prioritize bus speed and active transportation that benefit low-income riders and communities of color, specifically in South L.A. The top priority for this geographically-based effort is to break ground on Metro's Rail-to-River Project, a 10-mile active transportation pedestrian and bicycle corridor that will connect Southeast and South LA with the Crenshaw 'K' Line, Silver 'J' Line, and Blue 'A' Line.

We are very grateful to these foundations for enabling us and our partners help bus riders during the difficult year of 2021, proving that bus riders and bus advocates can together help ensure a bright future that doesn't require all of us to own cars and contribute to climate change.