#6 OF MAYOR VILLARAIGOSA'S TOP 10 REMARKABLE TRANSPORTATION ACCOMPLISHMENTS . . . AND COUNTING DOWN

posted by Gloria Ohland | 569mp
May 30, 2013
LA METRO'S BUS FLEET HAS EXPANDED FASTER THAN ANY OTHER IN THE U.S., IS THE CLEANEST IN THE WORLD, AND METRO'S FARES ARE THE LOWEST: LA Metro’s bus 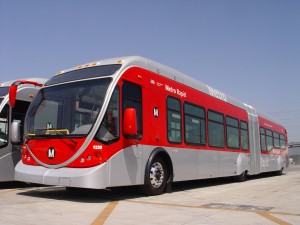 fleet, this country’s second-largest, is the largest “clean air fleet” in the world, with every one of the agency’s 2,227 buses running on alternative fuels, all but a few of them on CNG. The mayor, working with the Coalition for Clean Air, started the clean bus program in 1994 while representing LA County Supervisor Gloria Molina on Metro committees. And while Speaker of the California State Assembly he convinced Senate Minority Leader Jim Brulte, a Republican, to co-author legislation creating the Carl Moyer Program, which still provides grants for replacing dirty diesel fleets with clean alternative fueled vehicles. The mayor also, during his tenure on the Metro board, worked under the Consent Decree with the Bus Riders Union to add 500 buses during peak service hours, and he championed, with other board members, the addition of nine Metro Rapid lines -- which speed riders to their destinations in 23% less time than local bus service (because traffic signals hold green lights longer or shorten red lights). The mayor has also helped keep transit fares low by using the 20% of Measure R revenues that are dedicated to bus operations to subsidize fares at a time when other agencies across the U.S. have raised fares and cut back service due to economic difficulties following the 2008 recession. Metro’s fares are the lowest when compared to big city transit systems in New York, San Francisco, Chicago, Philadelphia, Portland and Atlanta. (It’s hard to make comparisons to all cities since some, such as Washington DC, calculate fares depending on the distance traveled.) Both LA Metro’s base $1.50/trip transit fares and discounted fares for seniors and the disabled (55 cents) are the lowest. Metro also has one of the largest discounted student transit pass programs, and among the lowest daily, weekly and monthly passes.