#7 OF MAYOR VILLARAIGOSA'S REMARKABLE TRANSPORTATION ACCOMPLISHMENTS . . . AND COUNTING DOWN 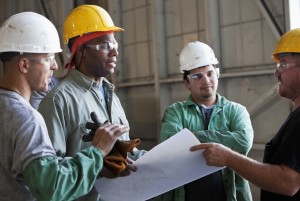 Last year LA Metro became the first transit agency in the nation to adopt both a Project Labor Agreement as well as a Construction Careers Policy applicable to all Measure R projects — policies that ensure there will be a union workforce and union working conditions as well as employment and training opportunities for people who live in local low-income communities. While Supervisor Mark Ridley Thomas deserves credit for taking the lead on this issue, Mayor Villaraigosa’s strong support was essential to its success. These remarkable victories by the Los Angeles-Orange Counties Building Trades Council, which championed the PLA, and the Los Angeles Alliance for a New Economy (LAANE) and the LA County Federation of Labor, which championed the CCP — both were championed by the mayor — won a unanimous vote by the Metro board across political lines as hundreds of workers looked on. The upshot is that all Measure R projects costing more than $2.5 million will be built using skilled labor trained in joint labor-management apprenticeship programs, and the contracts will be subject to all the protections and benefits associated with a middle-class livelihood. Forty percent of the work hours must be completed by workers living in neighborhoods where the annual median income is less than $40,000. Ten percent of the 40 percent must be struggling with poverty, chronic unemployment, homelessness or other challenges, and 20 percent must be apprentices. The PLA could cover contracts totaling as much as $70 billion if Metro fully implements its long-range transportation plan, which would translate into an estimated 270,000 union jobs. Projects that include federal funding must be open to economically disadvantaged communities nationwide. The PLA includes a no-strike provision and bars Metro contractors from locking employees out.

Mayor Villaraigosa's Top 10 remarkable transportation achievements:
#8: LA is becoming a better city for walking and biking. Read more.
#9: All 4,398 traffic signals in the city are synchronized. Read more.
#10: The Transit Corridors Cabinet is reorienting the city around public transportation, repairing the urban fabric, and preserving single family neighborhoods. Read more.
Uncategorized archives
Do you like this post?
Tweet
Tweets by @MoveLATransit