#8 OF MAYOR VILLARAIGOSA'S TOP 10 REMARKABLE TRANSPORTATION ACCOMPLISHMENTS . . . AND COUNTING DOWN

posted by Gloria Ohland | 579mp
May 23, 2013
LA IS BECOMING A BETTER CITY FOR WALKING AND BIKING:
The mayor began seriously 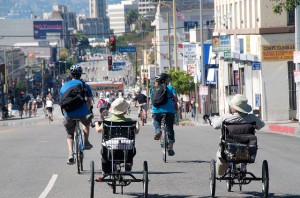 campaigning to make streets safer for bicyclists after a taxi cut him off while he was riding his bike in 2010, and he fell and shattered his elbow. It prompted him to convene a bike summit and begin talking about the need for a 3-foot safe passing law, and he championed CicLAvia and helped fund it, meanwhile accelerating passage of the city’s long-awaited bike plan to build 1680 lane miles over 30 years. He’s remained committed, building 123 miles of bike lanes in 2 years for a total of 431 miles citywide, and he fought for the funding to increase CicLAvia to thrice annually, also extending the route 15 miles to the beach. He reached agreement with the company named Bike Nation to install 400 bike-sharing kiosks in downtown LA, Hollywood, Westwood, and Venice Beach that will be stocked with 4,000 bikes – and requiring no subsidy from the city -- which would make LA’s bike-sharing program the nation’s largest. The mayor is also credited with presiding over a paradigm shift at the city’s Department of Transportation, which has taken new interest in non-motorized transportation. He oversaw the hiring of two LADOT pedestrian coordinators, spearheaded the adoption of “continental crosswalks” that are much more visible than conventional striped crosswalks, and launched a Safe Routes to School master plan. It should also be noted that while Speaker of the Assembly, Villaraigosa co-authored a Safe Routes to School bill that became the model for the national program that funds projects that make it easier and safer for kids to walk and bike to school. (Photo: Ciclavia.)