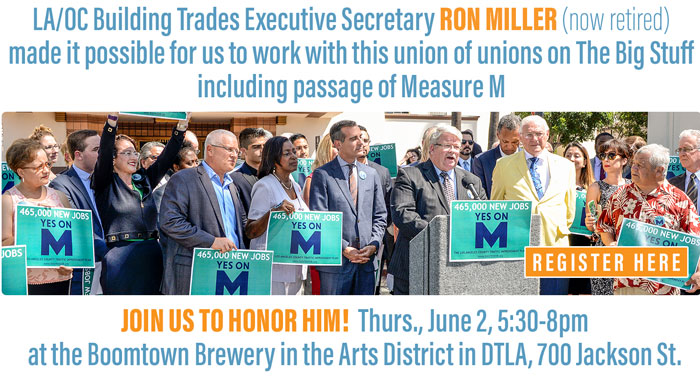 Those PLAs will provide jobs for skilled construction workers in many of the 14 Trades and 48 affiliated unions and district councils under his purview—jobs on projects such as the SoFi Stadium, Banc of California Stadium, the Lucas Museum of Narrative Art, LA World Airports, the ports of LA and Long Beach, LA Metro, the LA Department of Water and Power, NBCUniversal, Paramount Pictures, AEG and the Related Companies, and more—many of them with agreements that can be renewed into 2025 and beyond.

Economic equity is the issue that drives the Building Trades, whose members prioritize passing skills on to the next generation of workers through apprenticeships, because union workers make at least 16% more than non-union workers. And yet, as Ron wrote in an op-ed in the Building Trades newsletter on Labor Day last year, union membership has become an opportunity for the few.

Only 10.3% of Americans are now represented by unions, though in California there are more members than anywhere else in this country—14% are unionized. In the 1950s the percentage of union members in the U.S. was 35%, he wrote, but by 1983 that number fell to 20% and has continued to decline, while the federal minimum wage hasn’t been increased since 2009. Major industries have left the U.S. for better deals offshore, where labor is cheap, working conditions are substandard, and there are no environmental standards.

“The laws protecting workers’ rights to form unions in the U.S. are weak. Some voters are prejudiced against the unions. And they in turn elect lawmakers who don’t care about working people,” Ron wrote. “We’re seeing the sad results of this cut in union density. In the past 30 years much more wealth has gone to a small number of people than to the majority of working people.”

The 16% difference in pay for union vs. non-union really adds up over several decades, Ron says, because along with the higher pay comes high-quality health insurance and a pension.

Ron, a consistent presence and voice at Move LA board meetings, made it possible for Move LA to work closely with this powerful union of unions, and we appreciate him for his role on Move LA’s Leadership Board as an Executive Committee member. He worked with us to promote Measure M in 2016 (see the photo above), which followed on the heels of Measure R in 2008—together these two ballot measures are providing $120 billion over four decades to build out LA’s transit system.

Ron also worked closely with us on defeating Proposition 6, a measure submitted to California voters that would have repealed Senate Bill 1, now providing about $5 billion in annual revenue for local streets, state highways and public transportation.

Most recently, Ron was instrumental in setting up a dialogue between Move LA and the national AFL-CIO, the International Trade Union Confederation's Just Transition Centre, and the LA/OC Building and Construction Trades Council, to discuss opportunities for building cleaner infrastructure that would result in deep de-carbonization and high-road jobs for the building trades.

Discussions are already underway for bringing in federal and state resources to create a renewable energy hydrogen hub in LA County that would result not only in good jobs but also significant reductions in GHG emissions and air pollution. And we are already enjoying working with Ron’s successor, Chris Hannan, the next visionary to lead the LA-OC Building Trades!

REGISTER HERE to join us, Ron Miller and our other honorees (read more about them on our registration page) for an informal dinner at the Boomtown Brewery in the Arts District in DTLA, Thurs., June 2, 5:30-8pm to discuss our most recent work with the LA/OC Building Trades and other BIG STUFF.