Action Alert: Tell Metro to Include ALL Community College students in the Fareless Transit System Initiative

On Thursday the Metro Board of Directors will hear a report about the feasibility of providing fare-free transit passes to all low-income residents of LA County (about 70% of all riders) as well as K-12 students from the LA Unified School District, starting in January 2022 and August 2022 respectively.

But last week Metro's Executive Management Committee discussed the possibility of making all community college students fare-free since 75% are low-income, and including the other 25% would not cost that much more. It would also relieve colleges, as well as Metro, of the burden of determining who is low-income and who is not.

We absolutely need support from students—and/or faculty, trustees, staff and other advocates—to make this happen. It's easy, since public comment is at the beginning of the meeting and only 1 minute of public comment is allowed per person. Instructions on how to join are below, followed by more information about Metro's proposal to make fares free—called the Fareless System Initiative or FSI. 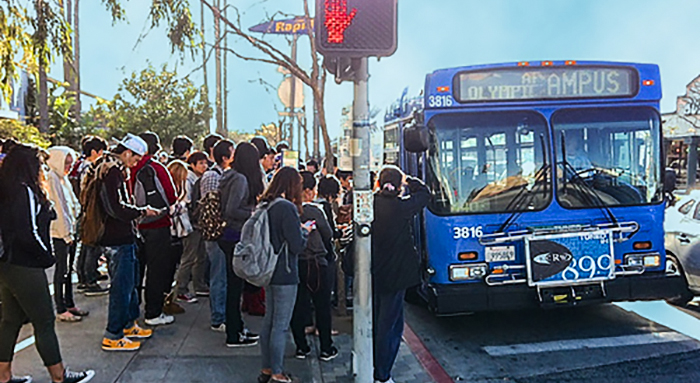 Metro Board Meeting, April 22 at 10 a.m.
The Fareless System Initiative is Item #42 on the Agenda and you can watch the meeting online here: http://boardagendas.metro.net. Live public comment can only be given by telephone at the beginning of the meeting, so you are advised to sign in by 9:55 a.m. at the latest. To provide a comment enter #2 when the comment period opens.
Dial-in: 888-251-2949
English Access Code: 8231160#
Spanish Access Code: 4544724#

Metro has been studying the idea of a Fareless System Initiative (FSI) and will decide next month whether to recommend an 18-month-long pilot program. As initially proposed it would provide free bus and rail service for all low-income riders.

Having students come to this meeting as well as the Board Meeting in May will be very important as some board members are likely to raise concerns about the short-term and long-term feasibility of the FSI program given the cost of making fares free. There will be no action taken at the Thursday meeting—a decision will not be made until next month.

Move LA has long championed free and/or reduced fare passes for college students, and believe Metro will miss an important opportunity by only including low-income college students. We believe the pilot should include all community college students because:

Please consider making a public comment in support of the Fareless System Initiative as increasing transit ridership is important for all of us!