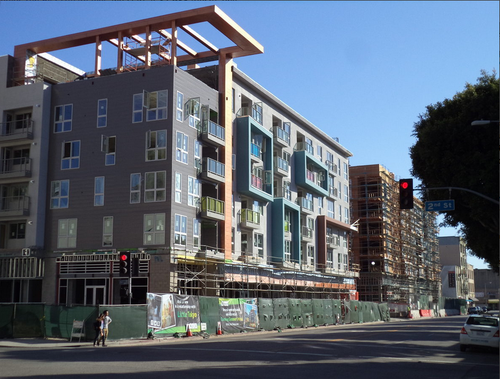 Curbed LA has been following LA's rental crisis with stories about low vacancy rates and the booming demand for apartments driving up rentsto terrifying new highs — median income earners here have to spend 47 percent of their household income on median rents. You would think that the apartment-building boom would help: Permits for new apartment construction are at pre-downturn levels and up 15 percent in the first quarter of 2014.  The LA Times reports that the number of building permits issued for apartments and condos last year was higher than at any time since 2006.

Increasing the supply of housing should bring down rents but the problem is that most of the apartments being built are Class A high-end rentals in the most desirable parts of the city. So while luxury rents might level off, the middle and bottom of the market won't likely be helped by this building boom.

Mom-and-pop landlords and smaller apartment complexes haven't been impacted "at all" by the boom, according to Westside Rentals, because "rents just keep going up and up and up." But if it's a really good time to be in the apartment business, it's a rough time to be the average renter . . . READ MORE.