Atlantic: A Boulevard of Equity and Opportunity? 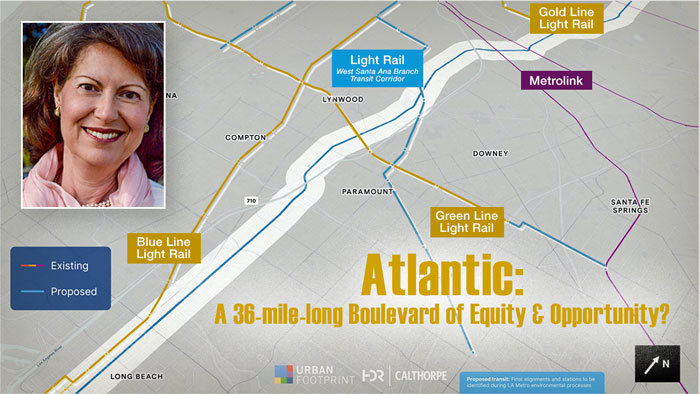 Below is a fascinating account of the Gateway Cities communities in southeast LA County that dramatically illustrates how the shortage of affordable housing in LA County and across the state has meant that many families who live here cannot afford the cost of an apartment or single-family home—causing some families to share homes instead.

Much of the unmet housing demand reflects overcrowding like this, not just in the Gateway Cities but in other communities as well, many of which have primarily single-family housing stock. We believe there is an alternative way to provide significant affordable housing for renters on what we call "Boulevards of Equity and Opportunity," and that 36-mile-long Atlantic Boulevard, which traverses nine of the Gateway Cities, could provide an example of what can be done.

Building housing along commercial corridors like Atlantic is of special interest now because many are losing their vitality and businesses because of the popularity of online shopping, a trend accelerated by the coronavirus. These corridors could allow for the construction of mixed-use mixed-income multifamily development without displacing existing residents or businesses, and with improvements that turn them into affordable and appealing neighborhoods—with trees and urban greening, neighborhood services and jobs, and streets made safe for people on foot and on bikes.

Moreover, many of LA County's 2,100 miles of boulevards are already served by transit. Atlantic, for example, is crossed by the Blue, Green and Gold Lines, the 710 freeway (and LA River) and—some day soon—the West Santa Ana Branch light-rail corridor to downtown LA. Atlantic is also under consideration at Metro for a new bus rapid transit (BRT) project like the very popular Orange Line in the San Fernando Valley.

(You can read much more about the potential for Boulevards of Equity and Opportunity on Move LA's blog—scroll down—here. And/or you can register for our Oct. 1 climate discussion!)

But change is hard and LA County's many cities are diverse. Nancy Pfeffer, Executive Director of the Gateway Cities Council of Governments—which represents 26 cities—was one of the speakers at our Zoomposium on Boulevards of Equity and Opportunity last summer. While she was interested in the concept she also listed some obstacles, such as the necessity to rezone the nine cities along the corridor to accommodate housing as well as commercial, and the difficulty of funding new services for new residents.

NANCY PFEFFER, EXECUTIVE DIRECTOR, GATEWAY CITIES COUNCIL OF GOVERNMENTS:
"I’d like to talk a little about the cities that are part of the Gateway Cities Council of Governments and about the Atlantic Boulevard corridor as it is today. The cities, in alphabetical order, include Bell, Commerce, Compton, Cudahy, Long Beach, Lynwood, Maywood, Southgate, and Vernon. When we talk about corridor planning we have to recognize that each of these jurisdictions has their own elected officials and their own general plan that has won support through a public process. So when you start to talk about regional plans or legislation to require re-zoning it’s very touchy.

"These are incredibly densely populated communities. New York City, for example, has a population density of 27,000 people/square mile; San Francisco has a density of 17,000 people/square mile. Six of the cities I just mentioned fall below the density of New York but above the density of San Francisco, and three of the cities—Lynwood, Bell and South Gate—are not far behind. As you drive through these cities you may see single-family housing, but in fact there are multiple families living in these homes, and the garages are all converted as living quarters, whether legally or not.

"Our residential pattern is a lot of very crowded single-family homes. There’s a huge amount of density crammed into these neighborhoods with low-rise housing built for single families, and as a result these are very auto-dependent communities. The transit network is such that people prioritize getting a car for the mobility they need, which means parking is essential. So while we can talk about enhanced bus or bus rapid transit on these corridors that is not the physical plan we are dealing with now.

"I don’t want to sound like I don’t think it’s possible. And the benefits that were talked about—including lower housing and transportation costs—are very attractive to lower-income households. But just know that it would require a very focused process in order to work with these cities.

"I want to raise another critical point regarding tax revenue, which is how cities are able to provide services to residents. When we talk about providing housing along these corridors that would create homes for new residents it’s important to understand that the cities I’m talking about don’t—with the exception of Long Beach—get more than 10 cents on a dollar from property tax revenues—it all goes to other places including the county, for example, and to education.

"At the direction of our board we recommended an incentive approach so that when our cities re-zone a commercial property to include residential they would be able to keep that property tax in their cities to pay for new services for their new residents—apart from what goes to schools. We believe that this could work and are hopeful that we can move this through the Legislature.

"The other thing I want to mention is that we are working on a Complete Streets Corridor plan with the cities along Atlantic. It will be our third—we’ve planned for complete streets along two other arterials and have other corridors queued up as well. But the point I wanted to make is that there is a lot of complexity in working with multiple small jurisdictions. There is definitely potential but we need to be aware of local issues and multiple jurisdictions."