What Recovery Could Look Like: Boulevards of Equity and Opportunity 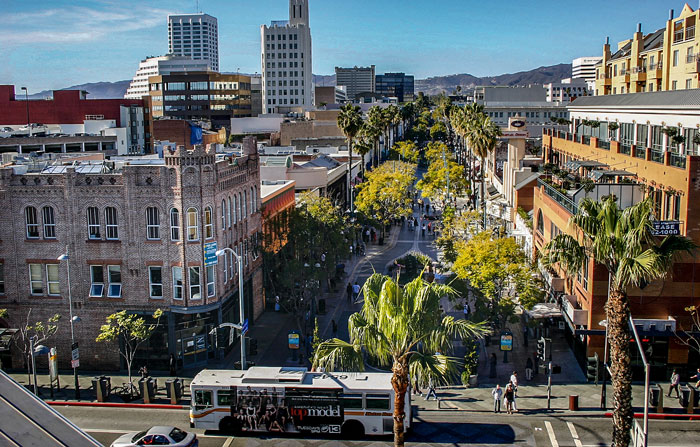 Everyone knows there isn’t enough affordable housing in LA County and that too many people live on the street. How are we going to expand the supply of housing for our low-income workforce and for people likely to become homeless as the economy flounders and more jobs are lost due to COVID-19?

Moreover, how can we rebuild transit ridership in urban neighborhoods served by transit when the people who use it the most can’t afford to live there anymore?

Move LA has a proposal about how to do this. We call it “Boulevards of Equity and Opportunity.”

First, we need sufficient land with good access to frequent transit where new neighborhoods can be built without requiring the demolition of existing housing or the displacement of residents. Second, we need policies in place and/or sufficient public capital to build housing affordable to low and moderate-income households in these new neighborhoods.

We believe state and local governments should enable and encourage, even prioritize, multifamily mixed-income housing along commercial boulevards and in downtowns that are well-served by transit—especially zero-emission bus rapid transit (BRT)—where because of longstanding zoning policies little housing has been built.

LA County boulevards have long been dominated by commercial uses, but many of these boulevards declined as retail moved to shopping centers, a decline accelerated now by the increasing popularity of online shopping. Many are ready for reinvention and redevelopment.

The new mixed-use neighborhoods with multifamily housing that we propose building along these boulevards should include robust urban greening as well as improvements that make it both safe and appealing to walk and bike—which would help attract new residents as well as new development.

There are already very successful local examples of neighborhoods like this, including some dating back to the 1980s. We think it’s time to take this model to scale.

Local History with Mixed Use

In the late 1980s the cities of Pasadena and Santa Monica, for example, began experimenting with mixed-use development, adding multifamily housing above ground-floor commercial uses in Old Pasadena along Colorado Blvd and around Santa Monica’s new Third Street Promenade. These initiatives necessitated challenging the specialized building codes and banking practices of the day.

To the surprise of many, people were eager to live in these neighborhoods. More than 3,000 units have been built in Santa Monica’s downtown since 1990 including 1,000 deed-restricted affordable units. This experiment in Santa Monica and Pasadena pioneered a new urban model for LA County.

In 2006 the Southern California Association of Governments (SCAG), concerned about the surge in regional population growth and sprawling development, released a study showing that if housing were built in downtowns and along commercial corridors served by frequent transit that all SoCal’s projected population growth could be accommodated on just 2% of the region’s land.

There are dozens of boulevards in LA County where this program could work—including Victory, Vanowen, Vermont, Valley and Venice, to list just some of the “Vs.” Many were once served by the Pacific Electric Red Car; some were important contributors to local economies and are still commercially viable. But many had their heyday decades ago and could benefit from the changes we propose.

Where Do We Start?

Fundamentally this program requires a partnership between LA Metro, local cities and LA County. The State of California would need to create a fund for affordable housing as well. Metro has planned but also needs to prioritize implementation of BRT projects along the boulevards with significant potential for community development and ensure that the city in which the boulevard is located is willing to collaborate and sponsor the development of affordable housing.

Many other required policies and resources are already in place:
• Funding was dedicated in both Measures R and M to develop BRT lines. Three projects are moving forward and Metro is working to identify several more.
• Measures R and M also provide funding to cities for complete streets and for walkable/bikeable first-last-mile connections to transit.
• Statewide funding sources, including the Affordable Housing and Sustainable Communities program funded by the state’s Cap-and-Trade dollars, could be tapped both for affordable housing and urban greening.
• Move LA sponsored SB 961, a bill authored by Sen. Ben Allen and signed into law by Gov. Brown in 2018, to allow cities and counties to create Neighborhood Infill Financing and Transit Infrastructure districts, called NIFTI-2 districts. This makes it possible to recreate a kind of community redevelopment district near transit, where tax increment financing can be used to build affordable housing in mixed-use mixed-income multifamily developments, as well as to fund transit infrastructure and urban greening.

In 2018, Move LA’s Executive Director Denny Zane—who had initiated the Third Street Promenade and the mixed-use planning model described above while mayor in Santa Monica—was awarded the Durfee Foundation’s Stanton Fellowship to develop a program that would essentially work toward realizing the 2% Strategy.

The intent was to marry Measures R and M’s commitment to BRT with a robust affordable housing program. He called this plan “Grand Boulevards,” but changed the name to “Boulevards of Equity and Opportunity” to emphasize the importance of creating new affordable housing and avoiding the loss of existing housing as well as the displacement of low-income families and longstanding commercial businesses.

Along the way Denny began a conversation with Peter Calthorpe, a San Francisco-based architect, urban designer, planner and principal/co-founder of UrbanFootprint, a company that provides cloud-based graphic GIS mapping and evaluative services that can help determine the potential for housing and transit ridership. Both were interested in the idea of building mixed-use development along underutilized commercial corridors served by transit as a way to create sustainable transit-oriented neighborhoods.

Last month we scheduled a symposium on the topic at SCAG — with Peter Calthorpe, Metro CEO Phil Washington, LA City Planning Director Vince Bertoni, Estolano Advisors CEO Cecilia Estolano (formerly CEO of the Community Redevelopment Agency in the City of LA), and many other speakers.

We got so many RSVPs after just one emailed invitation we would have filled the room. And then came the coronavirus. We had to cancel the event.

But we will stay the course. We are organizing several conversations on Zoom to discuss this further over the next three months. It is our near-term goal to convince at least one city or council of governments to become interested in beginning a boulevard planning process with Metro that can become a model for other cities.

We will tell you more—in case you want to help!— in coming weeks.