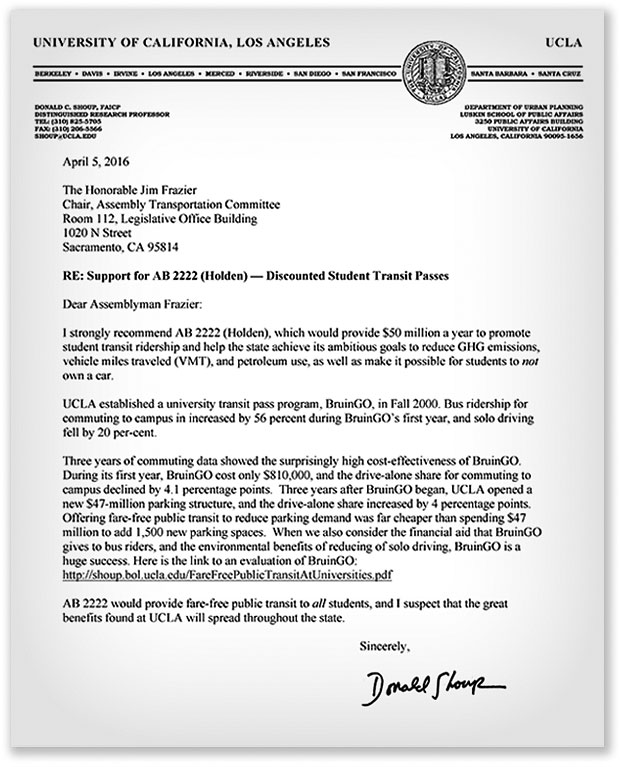 AB 2222, our student transit pass bill, passed out of the Assembly Transportation Committee with a unanimous vote largely because of all the support from educational organizations, colleges and universities, and students, as well as others. UCLA Professor Donald Shoup, who has published reports about the success of these programs, wrote about UCLA’s student pass program in his letter of support, pointing out that offering fare-free public transit to reduce parking demand was far cheaper than spending $47 million to add 1,500 new parking spaces!

Shoup and other UCLA researchers published a landmark study of 35 universal student transit pass programs around the US in 2001 finding, among other things, that they increased transit ridership from 71% to 200% and reduced the cost of going to school by $2,000/year since students didn’t have to own a car (costs that are probably much higher now). About the UCLA BruinGO pass, from his letter to Asm. Chris Holden:

"UCLA established a university transit pass program, BruinGO, in Fall 2000. Bus ridership for commuting to campus in increased by 56 percent during BruinGO’s first year, and solo driving fell by 20 percent.

"Three years of commuting data showed the surprisingly high cost-effectiveness of BruinGO.  During its first year, BruinGO cost only $810,000, and the drive-alone share for commuting to campus declined by 4.1 percentage points.  Three years after BruinGO began, UCLA opened a new $47 million parking structure, and the drive-alone share increased by 4 percentage points.  Offering fare-free public transit to reduce parking demand was far cheaper than spending $47 million to add 1,500 new parking spaces. (Italics are Move LA's.) When we also consider the financial aid that BruinGO gives to bus riders, and the environmental benefits of reducing of solo driving, BruinGO is a huge success. Here is the link to an evaluation of BruinGO: http://shoup.bol.ucla.edu/FareFreePublicTransitAtUniversities.pdf

"AB 2222 would provide fare-free public transit to all students, and I suspect that the great benefits found at UCLA will spread throughout the state."

Here is a link to his letter (in case the type above is too small to read).

And here's a link to the study of 35 programs.