C. HAWTHORNE: LA BEGINS TO TURN AWAY FROM PRIVATE URBANISM TOWARD NEW EMBRACE OF PUBLIC REALM 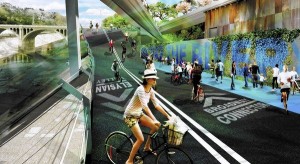 LA Times architecture critic Christopher Hawthorne cites city improvements including progress on planned subway and light rail lines, an expanded Union Station, Mayor Garcetti's proposed Great Streets initiative to accommodate cyclists and pedestrians and "activate the public realm," and his advocacy in Washington DC for $1.1 billion to remake the LA River — concluding that all have contributed to a sense that LA has "crossed a major divide and entered new civic territory" and that "our major streets are returning to the very center of civic life."

"Nearly every demographic trend suggests that the city's move toward a more public future is irreversible," he writes. "Simply put, Los Angeles is no longer in the business of building freeways or stand-alone houses, those twin anchors of its deeply privatized 20th-century identity."

He notes that LA has a higher proportion of renters — 52% — than any other metro area, and that most occupy multifamily buildings, which equate to increased density and mass transit use. He refers to the recent Expo Line ridership study to illustrate that Angelenos are in fact driving less and using transit more, and notes that we take more trips on transit — if bus trips are included — than residents of any other city except New York and Chicago.

Hawthorne adds that a measure to extend the Measure R sales-tax hike will likely appear on the ballot in 2014 or 2016, and if it passes — "as it probably will," he writes —and that it will accelerate work on crucial transit projects and the trend toward urbanism.
http://www.latimes.com/entertainment/arts/culture/la-et-cm-los-angeles-identity-architecture-hawthorne-essay-20131222,0,3245365.story#ixzz2otLJWprr
Uncategorized archives
Do you like this post?
Tweet
Tweets by @MoveLATransit