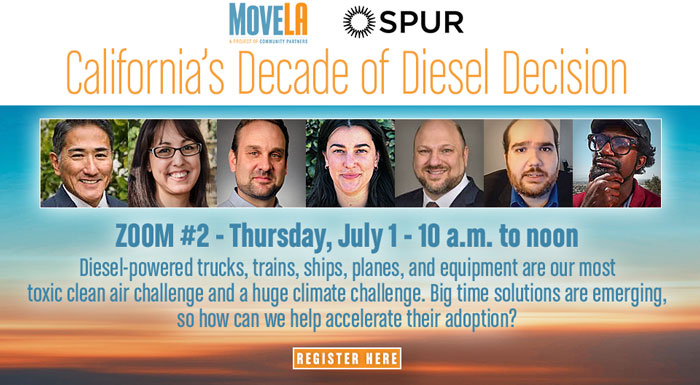 Engines operating on diesel or other pernicious fuels are the power source for so much commercial transportation—trucks, buses, trains, ships, off-road equipment (at the ports, on construction sites, as excavation machinery, etc.)—and they burn most of the world’s petroleum.

What could be worse? Maybe coal plant emissions, but nothing else.

Diesel emissions have an outsized impact on public health, air quality and climate change. These emissions cause asthma and lung cancer, damage crops, trees and other vegetation, and contribute to acid rain that taints the soil, lakes and streets, and enters the human food chain.

But how do we keep the economy running without diesel? Will battery-electric or hydrogen-powered vehicles become available in sufficient numbers and soon enough—and perform well enough? And will their charging and fueling infrastructure proliferate fast enough to keep the goods movement system running across the U.S. 24/7 like diesel engines do now?

And what if the answer is "It's not likely"?

Join us for Zoom #2—for a discussion about the time line for cleaning up trucks, trains, ships, planes and diesel—in our Climate and Clean Air series on Thursday, July 1, 10am-12pm. REGISTER HERE.

As a result of state and federal regulations the diesel engines manufactured today are cleaner than ever before, but because they can operate for 30 years or more they remain in use for decades, and are typically bought by other countries with less strict rules about emissions—or no rules at all.

As the LA Times pointed out last year the California rules “are part of a multiyear push to clean up freight-moving industries that are both a lifeblood of California’s economy and its dominant source of harmful pollution. Diesel trucks emit nearly one-third of smog-forming nitrogen oxides and more than one-quarter of diesel particulate matter in the state. Oceangoing ships are projected to surpass trucks to become Southern California’s largest source of nitrogen oxides by 2023.”

What is the best and most effective path forward? Come and hear the experts talk about it.

Join us for Zoom #2—for a discussion about the time line for cleaning up trucks, trains, ships, planes and diesel—in our Climate and Clean Air series on Thursday, July 1, 10am-12pm. REGISTER HERE.