THE CALIFORNIA-STYLE SALES TAX—IS IT REGRESSIVE?

Some Californians bring up the presumed “regressive” nature of sales taxes because they believe lower-income people pay a higher proportion of their incomes on sales taxes than people who make more money. But, while low income Californians are not exempt from sales taxes, the state has done the next best thing. California’s sales tax exempts all the basic necessities of life, including 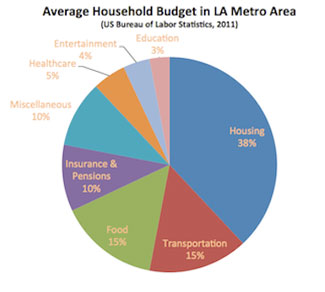 Moreover businesses and tourists pay more than 2/3 of all sales taxes collected in LA County, while individual households pay just 1/3.

This was confirmed by a study by the LA County Economic Development Corporation in 2016, which found that: "Purchases of taxable goods by households in LA County generated $4.1 billion in sales taxes collected in 2013, approximately 32% of all sales taxes generated in the county. Tourist purchases generated an estimated $760 million in sales taxes—6% of the county total. The remaining sales tax revenues, an estimated $7.8 billion or 62% of the total, was paid by businesses and others not counted, such as day-trippers and in-commuters."

In addition, the nonpartisan Washington DC-based Institute on Taxation and Economic Policy, which periodically surveys the fairness of tax systems in all 50 states, says California taxes overall are the "second fairest in the U.S." The institute's most recent report on the topic, in 2015, found that "California has one of the least regressive tax systems due to its heavy reliance on a very progressive income tax." Only one other state, Delaware, was found to be more fair, along with the District of Columbia.

Move LA has championed several sales taxes in LA County to fund investments that significntly benefit low-income people as well as all other residents. Move LA campaigned for Measure R in 2008 and Measure M in 2016, which together are providing $160 billion over 40 years for transportation improvements—including significant funding for transit expansion and operations and for bike and pedestrian infrastructure. We also campaigned for Measure H in 2017, which provides $350 million/year for 10 years for homeless services throughout LA County.