Peter Calthorpe on Boulevards of Equity and Opportunity

One of the highlights of our Zoomposium on Boulevards of Equity and Opportunity last month was a presentation by Peter Calthorpe, renown architect, urban planner, a founder of the Congress for the New Urbanism, and co-creator—with Joe DiStefano—of UrbanFootprint, a web-based urban planning and mapping platform.

Peter and Joe have used this tool to evaluate the housing potential along El Camino Real, a 45-mile mostly commercial roadway through the heart of Silicon Valley, in an effort to address California’s housing crisis. Their investigation, which was expanded to cover the five-county inner Bay Area, helps inform the increasing interest in using stretches of commercial boulevards that aren’t thriving—especially now given the interest in online shopping and concerns about the coronavirus—to provide mixed-income multifamily housing near jobs in walkable, bikeable, transit-oriented neighborhoods in California. 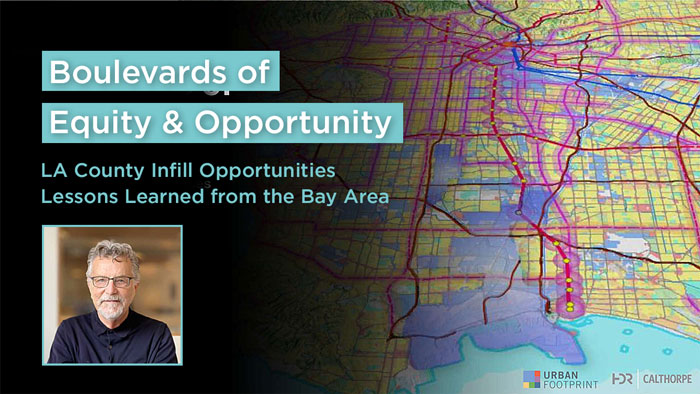 The video of Denny Zane's conversation with Peter is here and begins a little more than 28 minutes in. Peter's PPT is here, and below are excerpts from what he said:

“I have never seen a challenge as big as the one we’re facing with the housing crisis in California. We need systemic change if we are going to deal with the escalation in housing prices for working-class and low-income people who are being pushed out on the streets. It’s a tragedy of epic proportions, and the time has passed for incremental and piecemeal approaches. People are afraid of infill development because of the traffic it will create, and they don’t believe expanding the transit network will solve the problems—which is where Boulevards of Equity and Opportunity come in. . .

“The idea is to take underutilized land along commercial streets and convert it with the development of infill housing that is close to jobs and services along potential transit corridors without displacing people who live there now. Because we really cannot eliminate existing housing in order to build new housing, and we have to think through how cities can recover the cost of providing services to the people who will be living in these locations, which will cost money. . .

“We began our work by looking at El Camino Real in the Bay Area, the very famous historical corridor that connects 21 California missions and runs 43 miles from San Francisco to San Jose. It’s a commercial strip the whole way—with single-story buildings and a lot of surface parking lots—and a lot of underutilized land along streets where we could build broad sidewalks, bike lanes and bus rapid transit—and still have room for cars.

“Our UrbanFootprint software allows us to identify the parcels that are not residential—so that we’re not proposing taking down an older affordable apartment complex, for example, or looking into stable single-family neighborhoods that won’t want multi-family housing next door. It turns out that the quantity of land that could be used in this way along this strip is extraordinary and could provide for a quarter million households, at a variety of reasonable densities that can provide for a variety of housing types . . .

“Then we looked at the central five-county area in Northern California—we were looking at strip commercial land only—with an existing FAR (floor area ratio) of under 0.5, which basically means single-story buildings with surface parking lots. We’re not even looking at commercial land that is highly valuable, with employment locations and at higher densities, or in industrial zones that help maintain our industrial backbone. In these central five counties there are 700 miles of four- and six-lane arterials  of which about 400 miles could be redeveloped with  high-quality transit—such as BRT, which is the most cost effective—and offer the potential for about 1.4 million new housing units overall, including 350,000 units of affordable housing. . .

“It’s amazing that the property values of this land—given the existing uses—are so low that they generate very little tax revenue for cities, counties, the state and/or for education, whereas if that land was developed it could generate around $14 billion/year of new property tax revenue—and if the city and county share of that $14 billion revenue stream, about $3.5 billion/year, was bonded against it would equal $34 billion. . .

“So all of a sudden the issue of who pays for the development or for transit, bike lanes, enhanced school systems, more open space, or the other services required when cities accept new development becomes a self-funding strategy. And an environmental strategy. When people live closer together there are savings in water, energy, driving, emissions, household costs. The housing units that could be built range from townhouses along four-lane roads to lofts to apartments to walk-ups to live/work spaces, with the highest densities allowed near transit. . .

“We believe this has to be taken to scale—we need as-of-right zoning so that this development isn’t just episodic and being carried out in low-income communities while wealthy communities say “No thank you.” There needs to be inclusionary zoning. We need to be careful and thoughtful about what happens to the tax increment because it’s a pot of gold that can solve a lot of problems. We need to make transit investments. We can’t add, say, a million people to the inner Bay Area without investing heavily in new transit. . .

“Denny, you have asked me how much of the housing that gets built needs to be affordable and I have said 25 percent. And you’ve asked if I think that can primarily be done through an inclusionary housing program. I think it depends on the location. I believe there should be inclusionary zoning to integrate households. But I also believe there are nonprofits that produce affordable housing very efficiently, and they do it as stand-alone projects. So I think we need both inclusionary and housing subsidies for nonprofit builders. . .

“The idea I’m playing around with is that the ‘as-of-right’ carries with it an inclusionary requirement and the ability to capture and use a portion of the tax increment for local needs. And then on top of that, a part of the tax increment that comes to counties and cities could be put aside for an affordable housing trust fund and would become a subsidy for those stand-alone projects. So you’d be able to mix the two, and you’ve got the tax base to cover it all. . .

“In the end we have found that the massive tax increment can support more resources for our schools, better transit, bikeways and sidewalks, and more local parks—as well as support the local services needed for an increasing and diverse population. Infill housing on the commercial strip can solve our housing crisis and at the same time pay for affordable housing and much more."