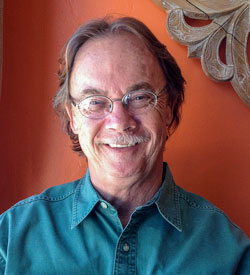 Denny joined the distinguished ranks of the Durfee Foundation Stanton Fellowship award winners on Monday! The ceremony was full of brief but highly inspirational and emotional speeches by 6 previous Durfee Sabbatical winners and the 6 new Stanton Fellows that were so moving there wasn't a dry eye in the place. The Durfee Stanton Fellowship provides a 3-month paid leave over 2 years to "support these magnificent people who want to change the world and then just go out and do it," Durfee Executive Director Claire Peeps told the audience.

Denny intends to use the sabbatical to investigate strategies for a "Grand Boulevards" program that would promote the creation of mixed-use and mixed-income multi-family housing along currently underutilized commercial streets that are now or will be designated as corridors for high-quality "bus rapid transit" (BRT) service. The goal is to provide one more solution to the intractable affordable housing crisis and to create more neighborhoods where people won't need to own a car.

Denny plans to investigate a number of ideas that have been suggested by constituency leaders to reduce the cost of construction and provide for investment in improvements like urban greening that would make these neighborhoods desirable places in which to live. These include:

"Land prices along many of these underutilized corridors are likely to be lower, and if construction costs are lower and the approval process is made easier, that will also keep costs down for developers. And if these corridors are truly livable then the creation of mixed- or middle-income neighborhoods becomes possible," says Denny.

Denny has experience with this kind of development, having played a major role in the development of the mixed-use Third Street Promenade while on the Santa Monica City Council, and also planning for more than 2,000 units of moderate-density housing (with more than 30% affordable) in downtown Santa Monica in buildings that averaged 5 or 6 stories. Denny began his career doing rent-control campaigns in Santa Monica and founding Santa Monica's for Renters Rights, which has maintained Santa Monica's progressive agenda over 4 decades.