DENNY ZANE TELLS THE LA TIMES WHAT HE WANTS FOR CHRISTMAS

posted by Gloria Ohland | 569mp
January 02, 2014
On Christmas Eve the LA Times confirmed that transportation officials plan to put a measure on the ballot in 2014 or 2016 either 1) raising the county sales tax by a half cent or 2) extending Measure R, the half-cent sales tax voters approved in 2008, beyond its 2039 expiration date. A new tax would raise the overall sales tax in LA County to 9.5%, and raise more than $100 billion. Extending the Measure R tax would allow Metro to pay down debt, thereby freeing up funding for other projects. 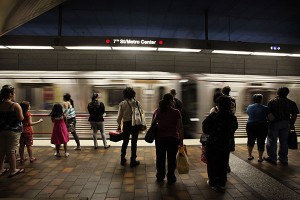 Move LA Executive Director Denny Zane told the Times that he hopes a portion of the new money would go toward a clean goods movement program that could help incentivize the use of new technologies like electric trucks. He said he'd also like to see investments in Metrolink and bike lanes.