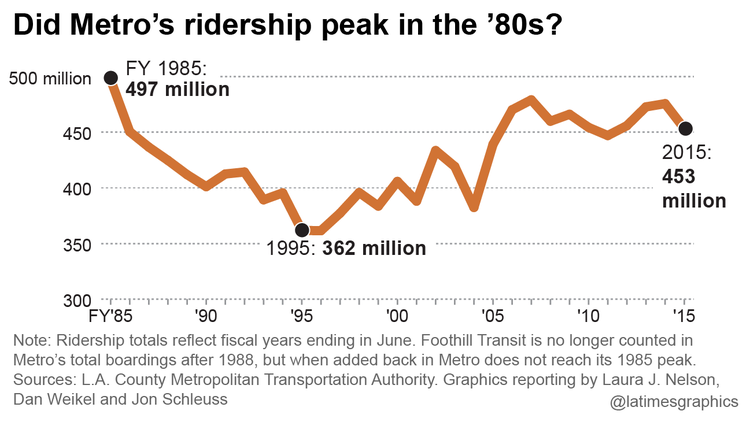 Ethan Elkind writes a provocative blog post in response to the LA Times front page story on falling transit ridership in LA County: Pointing out that it is not exactly fair to calculate the decline by comparing ridership now to ridership at its peak in the early '80s -- when fares were subsidized by the Prop A sales tax measure for 5 years and cost only 25 cents. Neither is it telling the whole story, he points out, to say that Metro is spending billions of dollars even as ridership decline: Yes the region is spending a lot of money, but the rail lines that are being built with this money (there are 5 rai lines under construction right now) haven't opened, with the exception of the first segments of the Expo and Gold Lines. "I'm certainly glad the Times is highlighting this important issue" so that we can address it, he adds, and concludes: "We shouldn't let reports like this undermine the case for finishing the job of building out LA's rail system. The region is only halfway done, and with these new projects under construction . . . ridership numbers will surely increase." Elkind is Associate Director of the University of California's Climate Change and Business Program, with a joint appointment at UC Berkeley School of Law and UCLA School of Law. He is also author of Railtown: The Fight for the Los Angeles Metro Rail and the Future of the City, published in 2014.