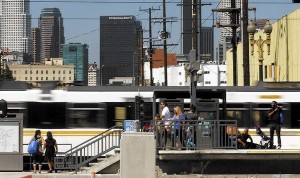 A new study of households living near Expo Line stations finds that residents reduced their daily driving by 10-12 miles or 40% and tripled their train ridership — also reducing their greenhouse gas emissions by 30%. In fall 2011, researchers from USC asked more than 200 households in the Exposition Corridor, the Crenshaw Corridor and Harvard Park to track their travel habits and odometer readings for seven days. The same households repeated the exercise in 2012, when the Expo Line had been open for about six months.

The study also found that stations with more bus lanes and fewer lanes of traffic were most effective at reducing the number of miles driven and increasing the number of transit trips, according to the study. Streets with too many lanes of traffic discourage pedestrians from getting to stations, according to chief study author Marlon Boarnet, and more people are likely to use a train if bus service complements it. He says this could help inform urban design as cities across the county install bike lanes and foster development around transit.

Ridership has continued to grow on the Expo line, increasing by 40% from 2012, when the line opened, to 2013.
http://www.latimes.com/local/la-me-expo-study-20131216,0,6863796.story#ixzz2otAoJ6eP
Uncategorized archives
Do you like this post?
Tweet
Tweets by @MoveLATransit