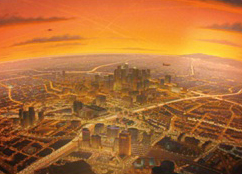 Governor Brown has signed SB 767, the bill authored by Senate President pro Tempore Kevin de Leon (D-Los Angeles) that would allow LA Metro to put a sales tax measure for transportation on the ballot in 2016. Move LA Executive Director Denny Zane's response: "It's time to double down on Measure R! We'll have the right measure, the right coalition and the right campaign -- remember that in 2012 the bill authorizing Metro to put Measure J on the ballot wasn't signed until 2 months before the election, making it difficult for supporters to put together a winning campaign." Measure R was passed by voters in 2008 and will raise $36 billion over 30 years for transportation projects and improvements.

LA County Supervisor Mark Ridley-Thomas, who chairs Metro's Board of Directors, issued this statement: “Angelenos have been tremendously supportive of measures that help build and expand our transportation system ‎and reduce congestion. The signing of this bill will allow Metro to continue to work with local stakeholders to determine whether to proceed with a measure for the November 2016 ballot.”

The board will decide next year whether to put a new sales tax measure on the 2016 ballot.