posted by Gloria Ohland | 569mp
January 29, 2013
The Source is celebrating with some photos, 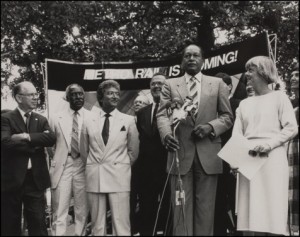 videos from 1989 and 1993 and an analysis from Metro's Dave Sotero, which begins:

On January 29, 1993, former Los Angeles Mayor Tom Bradley stood among a swarm of public officials and transit agency staffers on the cramped Pershing Square subway platform. Standing shoulders above everyone else, including then-California Gov. Pete Wilson, Bradley proudly inaugurated the opening of the first modern subway in Los Angeles.

“Twenty years is a long time. That’s how long we have been pushing on this dream, this vision of what we should do in Los Angeles County,” Bradley said, referring to the subway’s quixotic path to reality in ‘93. “I made a promise when I ran for mayor in 1973 that in 18 months, we’d deliver by breaking ground for rapid transit. Well, I missed by only a few months…”

Today, Metro marks the 20th anniversary of the Metro Red Line’s first phase from Union Station to MacArthur Park, a nearly 4.5-mile construction milestone that began a brand new chapter in regional rail construction and placing L.A. among other major cities across the globe with high-speed, high-capacity subways.