posted by Gloria Ohland | 579mp
January 30, 2014
LA is in the midst of a historic rail-building boom, with five rail lines under construction or in the final planning stages, but the debate continues on how to connect our increasingly robust system to Los Angeles International Airport. 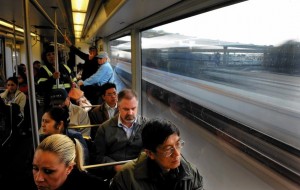 Last week several LA Metro board members agreed with a staff assessment that the construction risks of buildng a light rail tunnel under the terminals was too great and the estimated $3 billion price tag too high. But after a lengthy and heated debate the board left open the possibility of building stations under the airport and agreed to proceed with detailed environmental reviews of four options that would stop trains outside of the terminal area. (See previous Move LA blog post that links to diagrams of these options.)