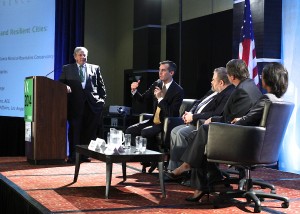 Downtown last week – is a place where high-profile decision-makers come together to publicly discuss and debate LA’s green future and the global green economy with this subtext: Markets in California are opportunity-rich. Speakers ranging from LA Mayor Eric Garcetti to UC President Janet Napolitano to Air Resources Board Chair Mary Nichols discussed topics ranged from “Are American Utilities in a Death Spiral?” to “Micro Apartments, Pop-up Retail and 3D Printed Houses” to “The High Desert Corridor: Sustainable, Multi-Purpose Infrastructure.” That highway and/or rail corridor, to hone in on the transportation discussion, would connect high-speed rail from San Francisco to Palmdale with high-speed rail (to be built with private investment) from Victorville to Las Vegas, with wind turbines providing the energy. “What we’re really talking about is rebuilding California’s highway system as electric rail,” said CA High Speed Rail Authority CEO Jeff Morales. “We want to connect San Francisco and Las Vegas and Los Angeles through Palmdale, where the Palmdale Metrolink line can bring high speed rail down to LA's Union Station." He said the XpressWest high speed rail line to Las Vegas could take 19 million cars off the road from LA to Vegas each year.

Move LA’s Denny Zane spoke on a panel entitled “Sustainable Transportation: Trains, Trucks, Buses and Fleets,” moderated by former California Assembly Speaker Pro Tempore Fiona Ma. Panelists included LA County Supervisor Zev Yaroslavsky, SoCal Edison’s Edward Kjaer, Cliff Gladstein of Gladstein, Neandross and Associates, and Stella Li of BYD, a Chinese manufacturer of electric cars and buses. Gladstein released a report showing that despite the fact that California is ahead of the pack when it comes to clean air regulations, the state will still not meet federally mandated air quality deadlines – which will require an acceleration of the commercialization and deployment of ultra-low emission heavy duty vehicles.

It was a good set-up for Denny to riff on the importance of paying down the incremental cost of zero/near-zero technology in order to help it penetrate the marketplace, adding that this is critical since “there are few sectors that generate as many jobs as goods movement, and it is a sector that is also fundamental to relieving traffic congestion.” Denny has been speculating on the possibility that a future sales tax measure could help pay down the incremental cost of clean-truck-only corridors, for example, as well as grade-separations and double-tracking that would disentangle passenger and freight rail.
Uncategorized archives
Do you like this post?
Tweet
Tweets by @MoveLATransit