Hydrogen will play an important role in the zero-emission revolution

There is a consensus that deep cuts in CO2  will require a lot of zero-emission transportation, and that hydrogen will play an important role—especially in California where we have set ambitious goals to phase out fossil fuel vehicles.

Meeting those goals is likely to require that we move quickly to develop both battery electric as well as hydrogen fuel cells for vehicles, and while the focus in the near term has been on batteries there is growing interest in California—but also in the U.S. and abroad— in hydrogen as another very important source of clean energy. 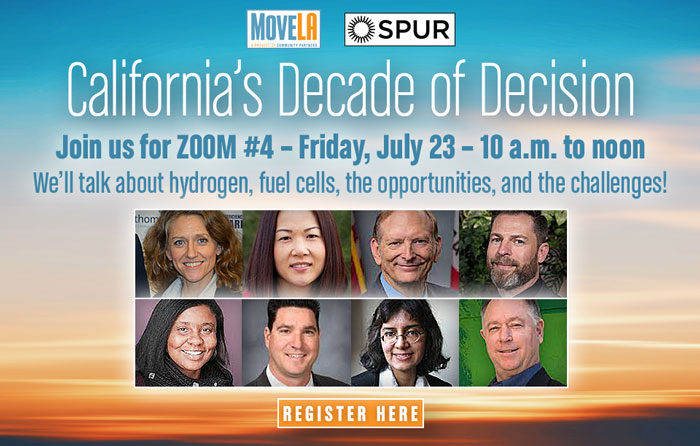 Our Zoom #4 call is about the possibility of a hydrogen revolution, the opportunities and the challenges, and we'll be talking with:

Join us this Friday from 10 a.m. to noon to talk about the interest in hydrogen as another zero-emission fuel source for vehicles and possibly other applications. REGISTER HERE.

While hydrogen is abundant it’s almost always found in a compound such as water (H2O) or methane (CH4), and needs to be separated into pure hydrogen to be used in fuel cell electric vehicles.

Today most hydrogen is produced from natural gas through a process called steam reformation. But the need for a clean fuel that can deliver energy with a significant range, faster fueling, and that isn’t heavy—as electric batteries are—especially for heavy-duty vehicles that travel long distances has increased interest in producing hydrogen from renewable natural gas, biomass or electrolysis.

Electrolysis is a process that uses an electric current to split water into hydrogen and oxygen. If the electric current is produced by renewable sources such as solar or wind the resulting hydrogen can become a truly clean fuel that, when used in a fuel cell, produces only water.

That also makes it a truly clean energy carrier that can be used to store, move and deliver energy, not just for transportation but for a broad range of applications across all sectors including power plants.

The California Air Resources Board’s most recent Advanced Clean Trucks Rule will encourage rapid deployment of hydrogen fuel cell powered heavy duty vehicles—which many observers believe is what hydrogen is best suited to do. It may also be able to power ships and planes.

While hydrogen is the most abundant substance in the universe, the use of hydrogen is “still in its infancy,” The New York Times noted recently, “and California is determined to be its cradle in the United States. . .”

We’d like California to remain at the forefront of birthing this revolution.

Join us to hear more about the possibilities of hydrogen as a new clean fuel source that together with electric batteries can get us to zero emissions before it's too late! REGISTER HERE.

Thanks to our sponsors for their generous support!