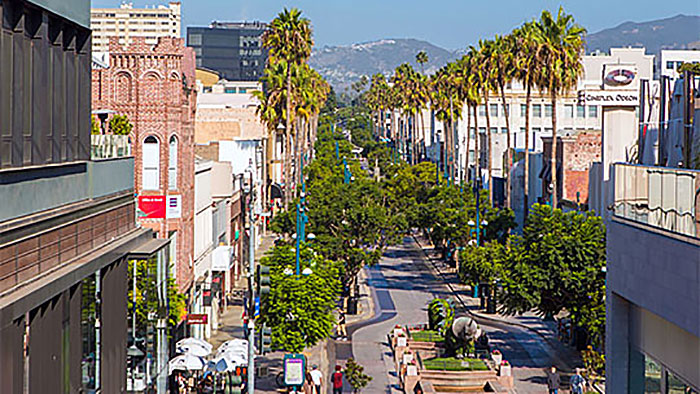 It's a new year and we are ready to go: We're gearing up our Vision 2020 Strawman to clean SoCal air and abate climate change by modernizing key regional transportation infrastructure. We've got a new plan to win truly universal student transit passes that dramatically boost transit ridership. We've been meeting with the Aging and Disability Network we helped organize. And we're looking for other ways to fund affordable housing, such as creating a TOD/TIF along underutilized commercial boulevards that would spend half the tax increment on affordable housing, and half on urban greening and first-last-mile improvements—all of this along what could become "Grand Boulevards" with high-frequency transit.

(Yes that photo is of the Third Street Promenade, the creation of which was led by Move LA Executive Director Denny Zane when he was on the Santa Monica City Council. It's not a Grand Boulevard but it incorporates many of the same ideas.)

We're eager for feedback on the Grand Boulevards and TOD/TIF idea so please consider coming to our "Community Development Chat-Fest" on Wednesday, Jan. 10, at the Helms Design Center in Culver City, from 5:30 to 8 p.m.

This event doubles as MOVE LA'S 10TH ANNIVERSARY CELEBRATION!!! Yes! You read that right: It's been 10 years since we first brought together a broad-based coalition that agreed to do something about LA's infamous traffic congestion and provide alternatives to driving—which we are doing, with the help of Measure R (2008) and Measure M (2016). Then we broadened our mission to eradicate homelessness in LA County by helping LA County Supervisor Mark Ridley-Thomas with Measure H (2017).

Now we are working with this ever-expanding coalition to focus on another goal we've had since the beginning: ensuring that housing affordable to core transit riders gets built near transit corridors and stations to help mediate gentrification and displacement as well as traffic, and to build healthier communities with a mix of incomes and a mix of uses that also promote the success of the transit system.

You can read more about this idea here, and please do consider attending our Chat-Fest to talk about it. Yes a $100 donation is recommended but it's not mandatory—you could pledge to become a monthly supporter for a smaller donation instead. And please tell us if you'd be interested in helping us host and/or sponsor and/or underwrite future events like this by contacting Marisa Garcia at 310-310-2390, ext. 5!