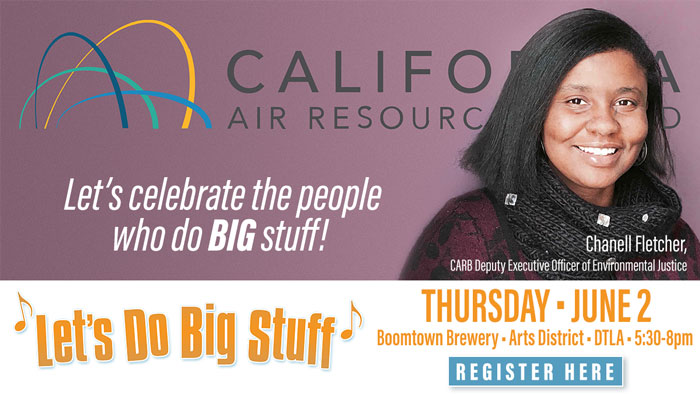 When Chanell Fletcher became ClimatePlan’s Executive Director a decade later, she wanted to build upon this goal but also address California’s history of inequity and racism and the effect of air pollution and climate change on low-income families, communities of color and other marginalized communities.

This allowed ClimatePlan to deepen its relationship with environmental justice and racial equity partners—including the Leadership Council for Justice and Accountability, PolicyLink, and Public Advocates—while continuing to work with long-time partners such as the American Lung Association and Nature Conservancy. Move LA was then serving on ClimatePlan's Leadership Board.

ClimatePlan was effectively building a movement toward equitable and sustainable land use and transportation. As Chanell told one reporter: “The great superpower of the network is bringing people together to create system change, and to start tacking the big questions and even bigger structural systems.”

Join us to applaud Chanell Fletcher and our other partners over an informal dinner at the Boomtown Brewery in the Arts District in DTLA on Thursday, June 2, 5:30-8pm. REGISTER.

AB 32 required CARB to create an Environmental Justice Advisory Committee (EJAC) to advise the board in developing its Scoping Plan—which determines how California can reduce GHGs 40% by 2030 and become carbon neutral by 2045—and requires the committee be comprised of representatives from communities with the most exposure to air pollution. With Chanell as a Deputy Executive Officer there is a bigger opportunity than ever to operationalize and address environmental justice and advance racial equity.

One of ClimatePlan’s most astonishing achievements was AB 179, which requires CARB, the CTC and the Department of Housing and Community Development (HCD), to meet regularly and work together—hopefully this model will also help CARB and EJAC work together.

This means the initial intent of ClimatePlan—to bring nonprofits together to work on big issues of common interest—is also being realized by state departments that hadn’t worked together and often made decisions undermining each other’s work.

It was the vision of SB 375 that brought Move LA and ClimatePlan together and we deeply appreciate that we are able to continue to work with new ClimatePlan Executive Director Naila Pope-Harden. And we especially appreciate that we now have a friend and colleague who is a Deputy Executive Officer at CARB, where many important decisions about climate change are being made right now.

Join us to applaud Chanell Fletcher and other partners over an informal dinner at the Boomtown Brewery in the Arts District in DTLA on Thursday, June 2, 5:30-8pm. REGISTER.