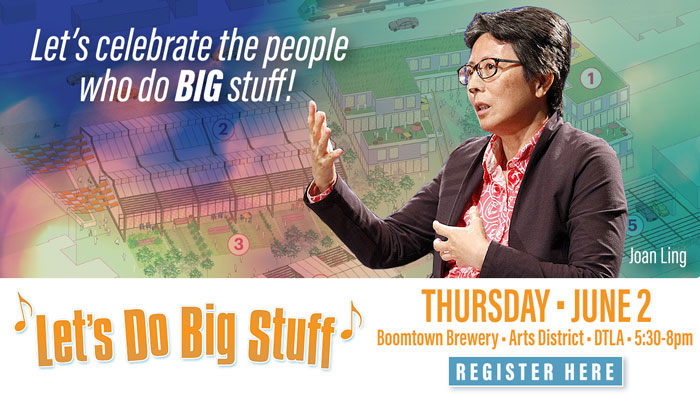 Joan has been a key player in the formulation and development of “United to House LA,” a voter initiative that is likely to be put on the November 2022 ballot. If approved by a simple majority vote, it would raise more than $800 million/year in the City of Los Angeles to build and preserve thousands of affordable housing units for very-low-income households as well as to prevent homelessness.

A broad and growing coalition of nearly 150 organizations—Joan and Move LA were key partners—have joined this effort and collected more than 98,171 signatures from Los Angeles city voters, well above the roughly 62,000 needed to get on the November ballot. The City of LA will now check the validity of the signatures, but given the number collected it is very likely to make it to the ballot.

As noted by LA Times columnist Steve Lopez, who discussed the measure in a column published this week, Santa Monica Mayor Sue Himmelrich is also gathering signatures for a similar proposal to fund housing and schools. “And in this state of both fantastic wealth and the nation’s highest poverty rate (factoring in the cost of living and housing),” he noted, “other cities are using what some have referred to as a luxury tax to shore up city services.”

UHLA will use the funds to help the poorest Angelenos afford safe housing and not have to live in encampments.

Joan began working on this effort in 2019 with many long-time colleagues who have sought to address income inequality and the resulting need for housing. She has been a key member of this team because she has so much experience as an affordable housing developer, property manager, real estate financial analyst, government loan underwriter and community planner.

Joan also teaches real estate, housing and planning courses at the highly respected UCLA Luskin School of Public Affairs, and before that she served on the Board of Commissioners of the Community Redevelopment Agency of the City of Los Angeles. She was appointed in 2005 by then Mayor Antonio Villaraigosa and served as the board's treasurer.

Redevelopment agencies were once the second largest funder of affordable housing in California after the federal government. They set aside at least 20 percent of their tax increment to fund the rehabilitation and construction of housing affordable to very low-, low- and moderate-income households.

Gov. Brown, however, eliminated the state’s redevelopment agencies in 2021, thinking it would help solve the state’s fiscal crisis in the aftermath of the Great Recession, but doing so has seriously reduced the funding available for affordable housing. The UHLA measure would fill that shortfall and then some.

Thankfully Joan and Denny and their colleagues continue to brainstorm about new ways to fund affordable housing as housing prices continue to climb, along with the number of people who have been forced to live on the streets.

Join us to honor our long-time colleague Joan Ling and our other partners over an informal dinner at the Boomtown Brewery in the Arts District in DTLA on Thursday, June 2, 5:30-8pm. REGISTER.