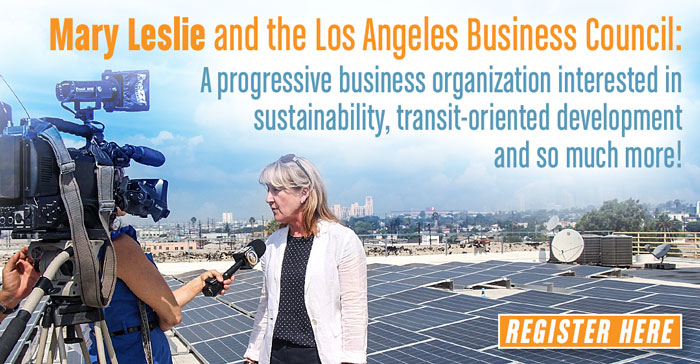 When Mayor Garcetti convinced Phil to leave Denver for Los Angeles, and Phil began working with the Mayor and LA County Supervisor Mark Ridley Thomas on affordable housing—and with the help of public-private partnerships—not everyone was on board. But Mary and LABC were there.

“The LABC believes transportation and housing are inextricably linked. It is the best way to build sustainability and not need a car to commute,” Mary says.

Six years later Metro has pioneered the most aggressive affordable housing policy of any transit agency in the U.S., after deciding that 35% of the housing built on land Metro owns will be affordable to households earning less than 60% of AMI. Metro has now built 2,200 housing units, one third of which are affordable, on Metro-owned land through the agency’s joint development program, and Metro is in negotiations over another 1,000 units.

Join us to toast seven transit champions including Mary Leslie, Thurs., March 25, 5:30-7 p.m.—Move LA is providing the drinks. (Free cocktail or mocktail delivered to your home! Details provided when you RSVP.) See all of our honorees below and REGISTER HERE.

“Clearly, constructing housing along rail lines as you build them makes more sense and costs less money than building rail lines all the way out to where the housing is now,” says Mary. “It’s all about leveraging the benefits of the transit investment.

Sustainability has always been the touchstone for the LA Business Council, which continues to focus on economic and environmental sustainability as the best way to advance LA’s economy: Renewable energy that harnesses the power of LA’s sun while generating local investment and jobs, energy efficiency that controls energy costs for businesses, affordable housing and transportation to help businesses recruit and retain workers.

Mary Leslie takes risks in her advocacy: LABC was a ballot signatory for both Measure R and M and supported Measure H in LA County for services to help the homeless, as well as Measure HHH, a voter approved bond in the City of LA to build permanent supportive housing for the homeless.

Some call Mary and LABC a breath of fresh air because of the advocacy they pursue. It may not seem natural to some to have a major local business community organization like LABC make sustainability, affordable housing, a humane approach to the homeless crisis, and the advancement of renewable power part of its core program.

To most urban communities, Mary and LABC would be a revelation, but in LA County in 2021, it just seems intelligent.

That is the genius of Mary Leslie’s leadership—leading, indeed teaching, the business community that sustainability, smart growth, renewable power and transit-oriented development are not words used only by the political left, but words used by the thoughtful, deliberate and community-minded—like Mary Leslie and LABC.