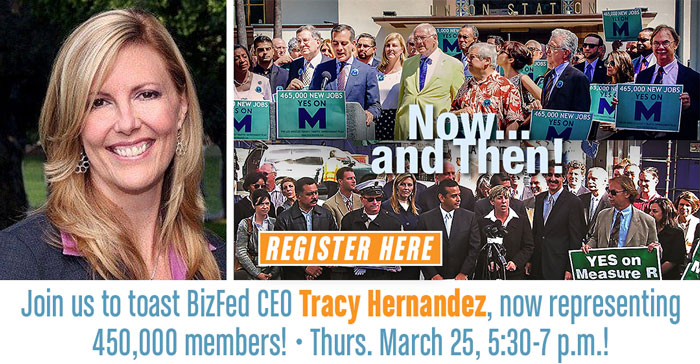 Join us on Zoom to celebrate Tracy Hernandez' success with BizFed, and our partnership on R and M, Thurs., March 25, 5:30-7 p.m. Register HERE. You can toast all of our honorees—we're providing the drinks!

The LA County Federation of Labor was the unlikely model she followed—a federation of labor unions that each had their own mission, agenda and memberships but understood that if they organized around common interests they would be more powerful.

Tracy says BizFed's many members do see the world differently, which makes for heated meetings on occasion, but Measure R in 2008 won a supermajority vote of her members. And when Metro Boardmember Richard Katz called to express his surprise at the supermajority vote and ask her if she'd also sign the ballot argument for Measure R, she said yes.

Measure R won, and later so did Measure M. “In the beginning we were assumed to be a counter voice to the Labor Federation,” she said, “but we worked together on Measure R—and the rest is history. It was pretty radical for a business group to support a sales tax measure.”

That was then and this is now, post COVID, and Tracy has been surveying her members on the future of transit. They say that working remotely will definitely be part of the mix, which suggests a reduced need for transit. Both she and her members believe, however, that Los Angeles, especially DTLA, needs a robust and integrated full-service transit system as much now as it ever did.

“We’re nowhere close to having a reduced need for transit—we still fully support all the investments in the transit system that are being made because of R and M and SB 1 [statewide legislation that funds transportation]," she says. "And people are now so accustomed to having things delivered to their doorsteps instead of going shopping that we’re likely to need an even more sophisticated transportation system.”

Hernandez has always thought that people who employ people—like her members do—should be more civically engaged so that public policy, social problems and community development could be better understood and well-served. And that idea has grown into what has now become “a massive grassroots alliance” of more than 210 chambers, trade associations, minority business groups, economic development organizations and business improvement districts—representing 450,000 employers and 4 million employees.

She is expanding BizFed to other regions that want to organize in order to strengthen and amplify the voice of business. Having launched the Central Valley Business Federation in 2018, the concept has proven viable for diverse regions.

“We operate under the same intel-sharing and issue-vetting processes and we collaborate,” she says. “The Board of the Central Valley BizFed can make their own decisions but we share our insights and when both regions agree our leverage becomes so much greater, especially on state legislation and for regulatory boards. When legislators and lawmakers see we agree we like to believe that they think, ‘Holy cow. We’d better get this done.’”