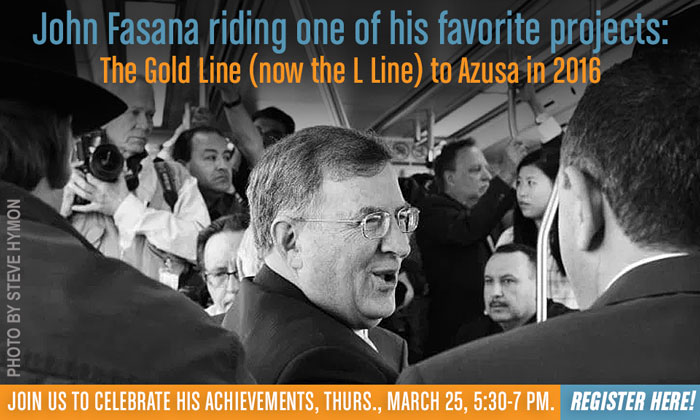 2020 proved to be a busy year for the mayor, who was also working hard to monitor the “New Blue Improvements Projects” along the Blue Line (now the A line) from DTLA to Long Beach. He was pushing Metro hard to ensure there was no skimping on  improvements: He wanted new lighting and signage, digital screens at stations, bus stops with shade, and to make sure that Blue Line riders—who had to take the bus for 9 months while improvements were underway—could get to their destinations.

Join us for a special networking event as we honor the accomplishments of Mayor Robert Garcia and other leaders who have taught us we can take on big challenges and win! Thursday, March 25, 5:30-7 p.m. on Zoom: Register HERE.

Fasana also chose to play the part of regionalist on a board that sometimes seemed biased toward projects in the City of LA—often perceived as the 800-pound gorilla in the boardroom. In this role Fasana helped promote projects all over LA County when their futures were uncertain—including Crenshaw and Expo—and while working to pass Measure M he pushed for funding to extend the Green Line to the South Bay, and for the West Santa Ana Branch Line—which will be the first rail line to serve Southeast LA County.

He also created LA County’s very first congestion pricing program, turning the underutilized HOV (high-occupancy vehicle) lanes along parts of the 10 and 110 freeways into toll lanes, thus encouraging drivers to drive off-peak, take transit, or share rides with others. The money made (from drivers who would pay higher tolls to drive in the HOV lanes during rush hours) was invested back into other projects benefitting these transportation corridors.

Fasana has been an advocate for other important San Gabriel Valley transportation projects, including Alameda Corridor East's program to improve 58 railroad crossings on one of the busiest goods movement corridors in the U.S. He’s championed Foothill Transit, known for providing superior bus service and good deals for students in northeast LA County. And he helped double the size of the El Monte Bus Station—home to Metro’s Silver Line and Foothill Transit’s Silver Streak BRT service—that serves 22,000 passengers and 1,200 bus departures (from 29 bus bays) with 24-hour service!

In 27 years you can get a lot done! Let's toast John Fasana!

(Note: The names of these rail and BRT lines have changed: The Gold Line is now the L Line, Crenshaw is the K Line, the Green Line is the C line, Expo is the E Line, the Silver Line is the J Line.)

Join us Thursday March 25, 5:30-7 p.m., to honor John Fasana and the other leaders who have showed us how we can take on big challenges—like the need for better transit service, more affordable housing and curbing climate change. REGISTER HERE NOW.