Joshua Schank: Interviewed by Steve Hymon on The Source 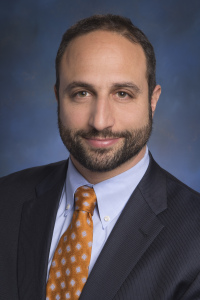 Dr. Joshua Schank, head of LA Metro's new Office of Extraordinary Innovation, been around the block: He’s lived in Paris, New York, Washington DC, worked for Senator Hillary Clinton on the federal transportation reauthorization, came straight to us from a well-known Washington DC-based transportation think tank called the Eno Foundation, and was at the Bipartisan Policy Center before that. He’s worked at the US Department of Transportation, and at New York’s MTA, and he’s a really interesting guy. He was interviewed by Steve Hymon for a podcast on Metro’s The Source, which you can listen to here. But I've more or less transcribed the interview below because I thought it was so good. Schank is also star of the Transit Coalition's monthly dinner at Metro Feb. 25 and you can register here.

On Los Angeles County’s smart voters
Transportation finance is easy to understand: Americans are underpaying for their transportation system and as a result that system is outdated and overused. If we want a better system we’ll have to pay for it. Los Angeles voters have recognized this and voted to tax themselves in order to improve their transit system. That’s why it’s so exciting to be here: We have the funding that gives us the ability to innovate.

Federal $ and state control
California and SoCal have aggressively gone after federal investment and done very well. While I understand that working with the state legislature has been a challenge, in California transit agencies have enormous autonomy. Some transit systems in contrast — in Boston, Philadelphia and New York, for example — are wholly owned by state and subject to whims of state politics.

LA and urbanism
LA is a big, diverse wonderful buffet of urbanism. The challenge is that it’s so big and vast but with density that is just low enough to make it a challenge to serve by transit. Congestion is bad, but it’s just not bad enough to make transit better. Most of the time driving is still faster, and the culture is still built around driving. I’ve never in my life seen so much on-street parking. I drive every day to the rail station and to me that’s a totally foreign concept. It’s going to take time to change the culture but in order to improve mobility and economic development that has to happen.

LA treats transit as a social service
Transit has to be more ubiquitous if it is to succeed: We need more BRT or rail that operates in its own right of way – and this is, in fact, what we are building – and all transit has to be more customer friendly. In LA transit is treated as a social service, not as a service to the larger community, and as long as we are doing that it won’t have an impact on overall mobility.

Increasing ridership
The key to capturing more riders is to serve existing riders better — that will bring new riders. Transit frequency here is high—better than in other cities—with buses in particular. Rail is still in its infancy. Washington DC, for example, has problems in terms of both safety and reliability, whereas here we are in much better shape. However, it will always be hard for transit to compete in a region where cars and parking are everywhere.

One initiatives he’s excited about
Providing bus or bus-like service that is more like on-demand transportation [shared use] than it is like transit: I’m excited about this because while it’s easy to provide bus service on heavily traveled corridors where there are a lot of riders and destinations, it’s much harder along a corridor where buses only come every 15 minutes because there aren’t many riders. Metro is going to lose those riders to on-demand services because people are less likely to be willing to spend that much time waiting for the bus. But there’s good middle ground here--partnering with on-demand services. [My note: Transit providers here and around the U.S. are beginning to partner with on-demand services to provide services on corridors where it’s expensive because there aren’t many riders.]

Private-sector finance
We’re in the middle of the biggest infrastructure expansion in the U.S. and there’s tremendous opportunity to accelerate this expansion if we bring in private sector finance, which will help us bring projects in faster with better outcomes. Design-Build-Operate-Maintain contracts have proved successful, but these public-private partnerships have to be approached in a way that’s conducive to success. Private sector financing is contingent on a steady, long-term source of revenue, which we have with the Measure R sales tax, whereas other agencies that only have farebox revenues do not have a steady source that’s attractive to private investors. Because of the sales tax we can introduce certainty that reduces the risk on financing construction projects.

The fact that there are projects with the potential for tolling, like the Sepulveda Pass, which could provide an additional revenue stream is also advantageous. But this project will be so enormous and expensive that it’s going to be hard to pull off under any circumstances.

Phil Washington did the first and largest public private partnership in the U.S. [a line to the airport] in Denver [which is where he was CEO before becoming Metro CEO] because like LA it has a sales tax dedicated to public transit. This allows us to guarantee the private sector a return on their investments. In Denver knew they couldn’t get everything done that needed to get done in the timeframe available unless they had private sector financing. And if they didn’t finish the project on time they wouldn’t get paid.

The reason we’re talking to the private sector is because there is a dearth of public sector financing in the U.S.

Metro and technology
Metro just staged an Industry Forum in order to let the private sector know that we’re open for business and we want their ideas about how to do better job. Because we are delivering infrastructure and services on a daily basis it’s hard for us to be innovative, but we can be open minded. We want industry to bring us their ideas and we’ll evaluate them and figure out which are most reflective of our objectives and goals. Just the fact that we are listening has changed the dynamic. (put out an rfp for widgets when in fact it may be something other than a widget that we need.)

The best transit systems
When I was 10 I lived in Paris and rode the Paris Metro and it was so ubiquitous and pleasant and easy that you didn’t even have to think about it. It changed my perspective on what a transit system can be. Hong Kong and Tokyo have also made tremendous investments in transit that are sustainable over the long term because the private sector, not public sector, made the investment and invested in commercial real estate development around the system.

Tremendous level of mobility in LA but . . .
We have made car ownership and driving much cheaper here than in other developed countries. That’s not necessarily bad because we enjoy a tremendous level of mobility. But now we need a more balanced and diversified system if we want to continue to grow in terms of population and economic development. Chicago, New York, Washington DC and San Francisco all have pretty sophisticated public transit systems that are not just a social service. We are behind and we’ve gotta catch up.