California’s latest Regional Housing Needs Assessment (RHNA)—the state-required estimate of the need for housing for people of all incomes over an 8-year period—projects that Southern California will need to provide more than 1.3 million new housing units, almost 60% of them affordable to moderate and low-income households. 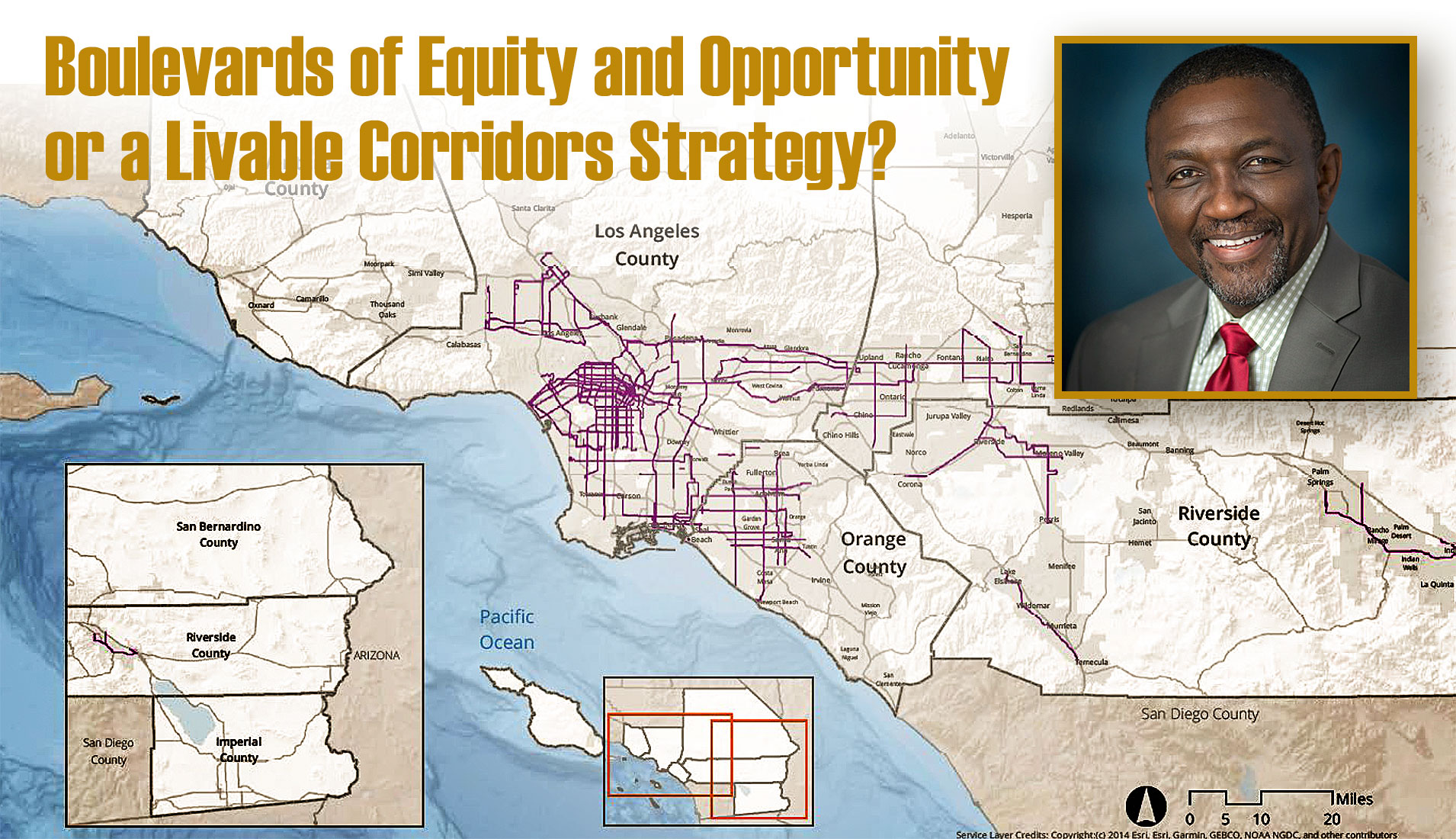 This asserted gap in the number of units being produced and the number of units that will be needed, especially units affordable for people who make less money, is what prompted Move LA to invite Peter Calthorpe and Joe DiStefano, who had co-created an online planning tool called UrbanFootprint, to our "Zoomposium" earlier this summer: We wanted them to estimate the potential to address this housing need by developing mixed-use mixed-income housing along LA County’s 2,100 miles of mostly commercial boulevards, and to join our Zoomposium panel discussion with Kome Ajise, executive director of the Southern California Association of Governments, and others.

These commercial boulevards are of special interest to SCAG and to Move LA for several reasons:

Peter and Joe found that there are nearly 20,000 acres of land along streets zoned commercial in LA County, which would allow for the construction of up to 1.6 million homes—double the RHNA need even if development were limited to sites that are currently vacant or developed with just a one-story building on half the lot.

Here is what Kome Ajise, in his position as executive director at SCAG, which is responsible for the RHNA housing distribution, had to say about this potential (we highlighted key points). Or you can listen to him live on our Zoomposium HERE (about 1 hour and 4 minutes in):

“SCAG is an agency that represents most of Southern California—a region that includes almost half the state’s population and two-thirds of the state’s disadvantaged communities—so equity must be a focus, whatever we do. We must develop land that maximizes access to opportunity, and has diverse housing and mobility choices, and we need to rethink how we build transit to serve the needs of the people who will use it.

“We have to focus growth and land development where we have the most infrastructure investments. If we don’t build affordable housing, and if we don’t do it right, we won’t be able to sustain Southern California’s economy—which I believe is the most vital in the country—and the region will lose talent and jobs.

“Our Connect SoCal long-range visioning plan for the 6-county region—which includes projections of population, household and employment growth and transportation demand—builds upon and expands land use and transportation strategies. The plan proposes investments of $638 billion across the region to help focus jobs, housing and transit in priority areas, some of which are coincidentally along the corridors Peter and Joe have talked about—we call these “livable corridors” in our plan. I appreciate the work they have done because it has provided metrics that show how efficient it is to focus growth where there are jobs, transit capacity, and other infrastructure.

“It is our intent to keep at least half of our future household and job growth in our ‘priority growth areas,’ which now comprise about 4 percent of the land. Our current plan states 64 percent of household growth and over 70 percent of our job growth will be in priority growth areas to maximize the use of existing infrastructure and make it possible for people to live closer to work so commute sheds are shorter and we can reduce GHG emissions.

“People have an idea in their minds of what ‘density’ means and most people hate it. Yet, when you see a presentation about how many different kinds of buildings can be built on land ranging from 20 to 80 units/acre, so much of it is really attractive and could be sustained along some of our corridors. Seeing this presentation could bend people’s imaginations about density, especially in the right context.

“A lot of our jurisdictions are producing housing, but it’s mostly above-market because that’s what pencils out as profitable. We have met our RHNA needs for market-rate housing in many of our communities—in some instances producing more than was required—but, there is no way to produce affordable housing without public subsidy when you consider the cost of materials, the permitting process, and labor.

“Peter Calthorpe spoke to the issue of possibly having tax increment financing capacity in all jurisdictions—as we had before Governor Brown did away with redevelopment agencies. Recreating tax increment financing is important to the development of below-market-rate housing, but we have to go beyond that and also provide some help on the processing side because as long as we have constraints in production and supply that result in housing shortages, housing will cost too much, and it will continue to push people down and out.

"We have to combine tax increment and inclusionary zoning and then streamline the permitting process. We need streamlined processes that permit a proposed use and the development of land without the imposition of special conditions as long as it’s housing in the right place, and with the right density. Don’t forget that market-rate housing is largely low-density housing. So, when we create multifamily housing along these boulevards, there will be workforce housing and affordable housing.”