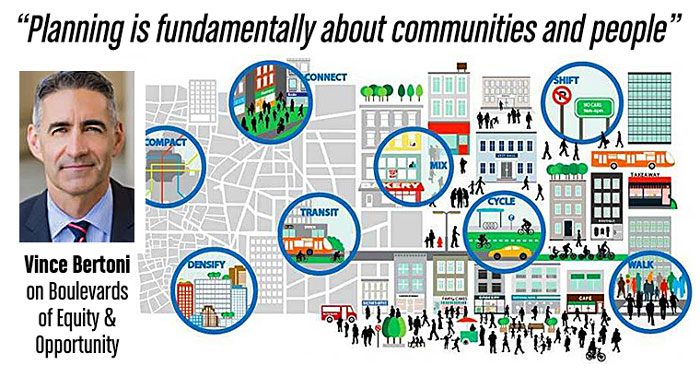 You may remember that Move LA’s Boulevards of Equity and Opportunity Zoomposium in July was largely about the shortage of housing—especially affordable housing—in LA County and the City of LA, which prompted us to investigate the possibility of building housing along the county’s 2,100 miles of commercial boulevards.

We are particularly interested in the construction of housing in mixed-use, mixed-income development, along boulevards that are well-served by transit—as most commercial boulevards are—and can be improved with street trees and urban greening, made safe for walking and biking, and provide jobs and neighborhood services without displacement of current residents and businesses.

aid earlier, building infrastructure and roads has often done great harm to communities—we must acknowledge the history of zoning as it relates to systemic racism and injustice.

This led us to stage a very well-attended Zoom call with a dozen speakers and an audience of 600, and we have been posting the transcripts because each speaker addressed the issue from a different perspective. (You can listen to the discussions here—or view the transcripts on the blog on our website.)

Below are remarks by City of LA Director of Planning Vince Bertoni, who has worked on developing affordable housing near transit in the city, primarily through an innovative program called the Transit-Oriented Communities Incentive Program. This relatively new program encourages developers to build more housing units near bus and rail lines, and provides incentives (increases in height and density, for example, and reductions in parking) if the development includes affordable housing.

Vince expressed concerns about the potential for displacement, and the importance of involving communities in visioning and planning activities:

“We have been discussing the viability of planning for housing along LA’s many commercial boulevards. It’s important we keep in mind that planning is fundamentally about communities and people. As Metro CEO Phil Washington s

“America has a 400-year legacy of doing great harm to black people. More recently City Planning has contributed to inequality through our zoning laws in the last 100 years. Before we start thinking of boulevards as a way to bring people together we have to remember this—that in the past our grand plans and large initiatives have directly harmed communities, especially communities of color, and especially neighborhoods where there has been under-investment for too long.

“The City of LA has had a long-term practice of aligning residential and commercial areas. Zoning in LA has historically been based on restricting certain land uses on any given parcel, which can lead to the unintended consequences of segregation and unequal investments in neighborhoods.

“Displacement is a very complex and sensitive issue and means many things to many people. It’s not just about displacing a person who is living on a piece of property but may also mean displacing somebody who lives nearby, or displacing a business that is providing local jobs or services in an area where it’s difficult to get around. Displacement isn’t always about what’s happening in a certain place but may be the result of changes happening in other neighborhoods in the City of LA—which covers 460 square miles. Grand plans and initiatives may create forces that result in displacement throughout the city.

“We need nuanced plans. We have a Transit-Oriented Communities Incentive Program that encourages construction of affordable housing near bus and train stations to provide convenient options for low-income residents while also adding to the city’s housing stock and promoting alternatives to traveling by car. This program was created by Measure JJJ, approved by voters in 2016, and implemented by City Planning with great success. It had the support of ACT-LA, a coalition of community-based organizations that have spent decades working in our neighborhoods to come up with incentives for affordable housing.

“We have learned to look at building housing in a more nuanced way: It’s not just about the number of units and income levels of people who will live there. We also have to look at how many bedrooms are included, for example, because 2- or 3-bedroom units can house one or more families safely, while 1-bedroom units and studios cannot. Will new residents have access to open space? We have to look at how new developments fit into the context of existing neighborhoods.

“We can’t just build housing along commercial boulevards and consider our work finished, but rather we have to build housing that is actually affordable for the people who live there now and that will support their community. We have to look at every project through an equity lens and recognize the need for community input.

“So while I see the potential for the development of these boulevards, there must be a community-based vision—which requires resources we don’t necessarily have—and we must be sure that as we plan around transit we are also planning for the people already living in the neighborhoods that are under development pressure. We have to have a strong connection between planning for our communities and planning around transit. And when I came on board as the Director of Planning a few years ago I was so happy that Metro CEO Phil Washington understood the need to talk about how our organizations can work together to  plan a transit network. We have to plan for whole communities, for new and existing Angelenos."