LA COULD BE ONE OF FIRST CITIES WITH ELECTRIC FREIGHT 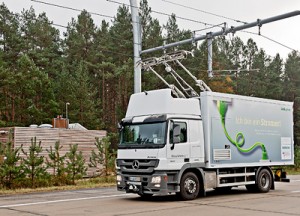 The new technology, called eHighway, uses overhead electrical wires to transmit energy to trucks — much like streetcars. This system, which is being worked on by Siemens, has been proposed as one way to cut pollution on the 710.

Read more in the LA Times. (This was published in May; but I missed it!)
Uncategorized archives
Do you like this post?
Tweet
Tweets by @MoveLATransit