The project proposal was put together by the Shared Use Mobility Center — a national, public-interest organization working to foster collaboration in shared transportation — which partnered with Move LA, NRDC and others to stage the Live Ride Share conference on shared mobility earlier this year. Both executive director Sharon Feigon (to the left of De Leon in the photo below) and Program Director Creighton Randall had previously run carshare companies — Sharon was CEO of I-Go in Chicago and Creighton headed up Buffalo Carshare in Buffalo, NY, where 2/3 of households served made less than $35,000 a year, 50% made less than $25,000, and 25% made less than $15,000. 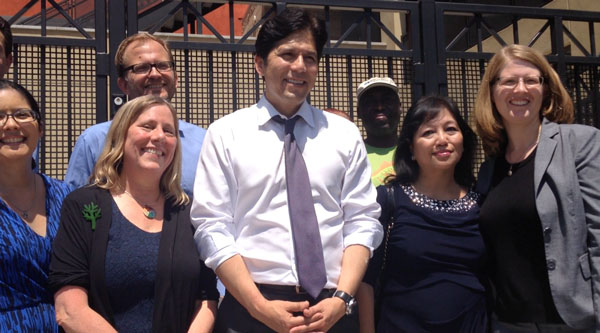 Research by Susan Shaheen at UC-Berkeley suggests that 7,000 carshare users would avoid purchasing 1,000 vehicles, resulting in emissions reductions of 2,150 metric tons of CO2.

“The size and scope of this endeavor make it an unprecedented public investment in shared mobility,” says Sharon. “This project will increase access to transportation for thousands of Angelenos, attract private-sector investment, increase public awareness of electric vehicles, and cut congestion and harmful emissions."