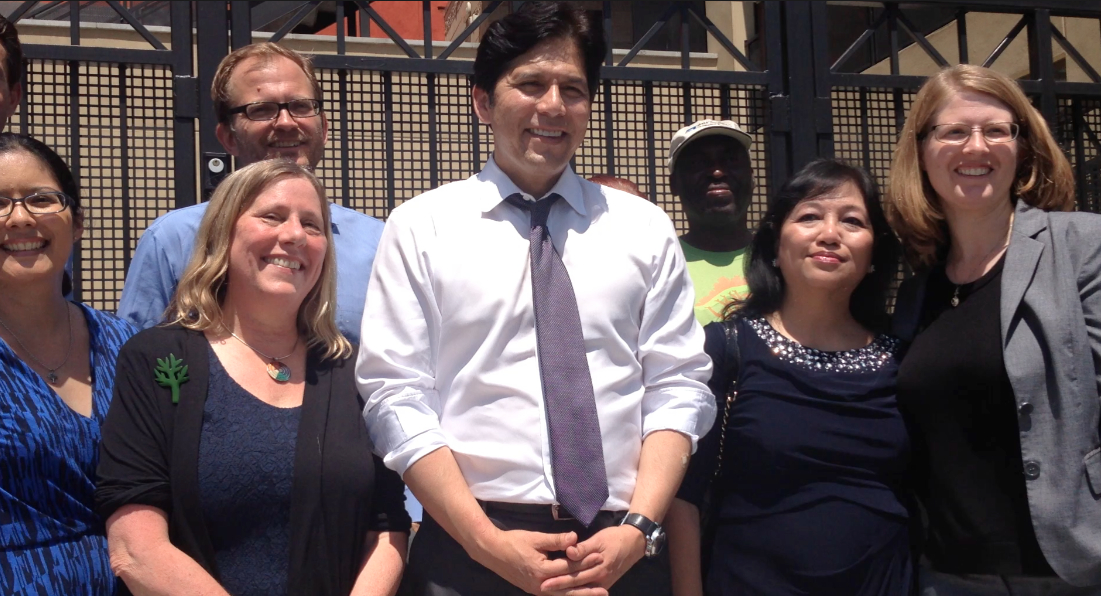 (Photo of state Senate Pro Tem Kevin de Leon flanked by Matt Petersen [behind to left] and Susana Reyes [right] from the LA Mayor's Office of Sustainability, and Sharon Feigon [left] of the Shared Use Mobility Center at a press conference last summer when grant for low-income EV carshare was announced.)

The LA City Council’s approval on Dec. 13 of the contract to begin LA's low-income electric vehicle carsharing program is exciting for many reasons, including that it once again proves California is a climate change leader and is investing Cap & Trade dollars in LA's low-income neighborhoods. More reasons:

The 100 electric vehicles and 200 charging stations will be located in low income neighborhoods in downtown LA, Pico Union, Westlake and Koreatown. The cost for low-income households to join is discounted: $3-$4 per month for a membership, depending on income, and $3-$4 per 20 minutes of use—relatively inexpensive if one compares it to taking a 20 minute ride with Lyft or Uber.

But classic carsharing and Lyft and Uber are not really the same thing, and LA’s low-income EV carsharing project is kind of a permutation: Residents who qualify can join the carshare and use the 100 vehicles that are parked in publicly accessible places—same as classic carsharing organizations. But these carshare members can also drive a car on a one-way trip to some locations, such as rail stations, and leave the car for someone else to pick up and rent—offering less-expensive transportation like the one-way trips on Lyft and Uber.

The goal is to make it easier to live without a car in Los Angeles, which makes the cost of living a lot less expensive! The ultimate goal is to reduce car ownership and driving as well as GHG emissions and air pollution—whether or not you own a car is the biggest predictor of how much you will drive (if you own a car, studies show, you will drive more).

If people can share a car and use it to access transit they may not need to own a car—cars are expensive and a hassle to keep in the city! AAA pegs the cost of upkeep at an average $9,000 a year; it’s estimated that the people who earn the least end up spending 12% of their pre-tax income on gas every year!

This project was made possible by state Senate President Pro Tem Kevin de Leon and his Charge Ahead legislation, which created a new grant program at the California Air Resources Board. CARB awarded the City of LA a $1.67 million grant to begin the program. Steering Committee members include the national nonprofit Shared Use Mobility Center (SUMC), Move LA and NRDC's Urban Solutions Group, and 3 community-based organizations that will help with outreach and education in neighborhoods.

These community-based organizations—Koreatown Immigrant Workers Alliance, TRUST South LA, and the Salvadoran American Leadership and Education Fund—will play a pivotal role in the success of the project. They will be hiring an outreach and marketing manager and a team of neighborhood “ambassadors” in the next few months (good job opportunities here!) to help recruit 7,000 or more new EV users in the neighborhoods.

Also key to this project has been the national nonprofit SUMC, which is based in Chicago. SUMC Executive Director Sharon Feigon’s I-Go carsharing program in Chicago served low-income households, and SUMC Program and Development Director Creighton Randall ran a successful low-income carshare in Buffalo. The Mayor’s Office of Sustainability and the LA Department of Transportation are also playing significant management roles.

The company providing the cars is called BlueCalifornia, an affiliate of a company called the Bollore Group, which runs an EV carsharing program called Autolib with 4,000 cars in Paris, and also a carsharing program in Indianapolis.

The city, SUMC and the other partners plan to approach CARB for more funding for an expansion of the low-income EV carshare program into East LA and South LA and possibly even into the San Fernando and San Gabriel valleys and the Harbor area. Three of the neighborhoods that will be funded (Westlake, Koreatown and Pico Union) are in the LA Promise Zone; this federal designation is intended to promote sustainability and livability and will help leverage other federal funding.

Creighton Randall of SUMC wrote this in an LA THRIVES blog post last week: “While BlueCalifornia will initially invest $10 million in a sizeable 100-car electric fleet and 200 charging stations, the possibilities are even greater. When you consider that [the Bollore Group’s] Paris’s Autolib EV carsharing system has expanded to 4,000 vehicles, the idea of a carsharing network that reaches all of LA doesn’t seem quite so far-fetched.

“With the possibility of continued support at the state level, public investment may eventually grow to between 10 and 15 times the scale of this first phase, and private sector investment could multiply by a factor of 20 or more over five years. The long-term growth and success of this system will ultimately require rapid market-driven expansion in parallel to public investments, creating an extensive network that serves all Angelenos.”

LA’s low-income EV carshare is off to a great start and will provide yet another transportation solution that reduces dependence on oil and the internal combustion engine, reduces GHG emissions and air pollution, makes living more affordable, invests in sustainable transportation infrastructure in low-income communities, promotes other kinds of transportation including walking and biking, and provides great first-last-mile connections to all the new rail lines and stations that get built with funding from Measure M!