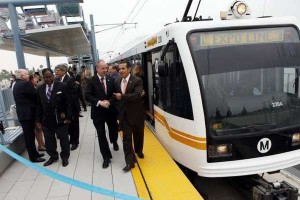 The LA Times gave a 100+ percent endorsement of Measure J today, arguing that it is a win for transit, the economy, and for LA County. Entitled "Yes on Measure J," read the endorsement in its entirety below:


Something extraordinary happened in Los Angeles County in 2008: At a time when the local and national economies were melting down, local voters opted, by a two-thirds margin, to raise their own taxes. Specifically, under Measure R they upped the county sales tax by half a cent on the dollar to pay for transportation improvements.

Measure J wouldn't increase anybody's taxes, but it would extend the tax approved under Measure R for another 30 years — from its current expiration date of 2039 to 2069. That would allow transit managers to borrow money on the bond market in the near future to be repaid from anticipated tax revenues that would roll in after 2039, which should allow them to accelerate construction on a list of up to 15 projects that were already in the works thanks to Measure R. What this means is that, ideally, the projects could be completed in a matter of years rather than decades. The projects slated for acceleration include an extension of the Gold Line light rail eastward, the Westside subway, an extension of the Green Line to L.A. International Airport, improvements to the 5 Freeway in northern L.A. County, ramp and interchange improvements on the 405, 110 and 91 freeways, and sound-wall construction countywide.It's not certain that all 15 projects would actually be sped up. Most depend on federal money in addition to local revenues, and the federal government won't necessarily cooperate. But if it doesn't, L.A. taxpayers haven't lost a dime — if the federal funds aren't forthcoming, the bonds won't be issued. In lieu of the bond market, meanwhile, transit planners could turn to the federal government for loans. A new U.S. Department of Transportation program allows municipalities to borrow money for transportation projects, which could be repaid with Measure J funds.

Wouldn't Measure J just stick future generations with the bill for this generation's infrastructure? Not really. Light-rail lines are expected to last at least 100 years; future generations will still be driving the highways and riding the rails being built now, and there's no reason they shouldn't be asked to pay their share of the cost. Moreover, borrowing and construction costs are unusually low at the moment, so it's probably cheaper to build now than later. Accelerating construction would boost jobs at a time when Los Angeles could badly use the economic stimulus. And although Measure J would tie up the tax money generated by Measure R for even longer than the original measure, that doesn't mean it will tie the hands of transit planners in the future — they can still build projects not on the Measure R list, using the proceeds of two previous sales tax initiatives, Measures A and C.

Isn't it a bit early to be extending the sales tax when it's not clear whether Measure R is a success? Actually, Measure R's success is already pretty clear; in three years, the Metropolitan Transportation Authority has completed an extension of the Orange Line dedicated busway to Chatsworth and started construction on two light-rail lines and three highway projects. Much more is on the way, regardless of whether Measure J passes.

Measure J's opponents bring up the same tired arguments that were used (often by the same people) to oppose Measure R; mostly, they're from parts of the county where people don't feel they have as much to gain as folks in downtown or the Westside. But that's not the case. Traffic burdens the whole county, and there's a good chance that people who live in areas without a lot of upcoming projects commute or sometimes travel to areas that do, and thus would benefit from faster travel times. Meanwhile, 15% of the money raised under Measure R (and J) goes to local communities — to every city in the county — to spend on improvements in their area.

The transit projects accelerated by Measure J would ease congestion, reduce pollution and increase quality of life, without raising taxes. If Angelenos of the future decide they don't want to continue paying the half-cent sales tax, they can vote to sunset it. But in November, Angelenos of the present should vote yes on Measure J.