LOS ANGELES AND THE METROPOLITAN REVOLUTION 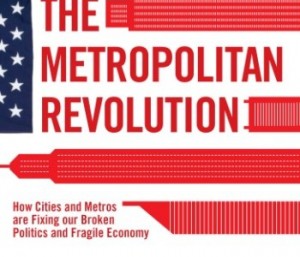 There’s been a lot of interest in The Metropolitan Revolution, the new book by Bruce Katz and Jennifer Bradley of the Brookings Institution. In sum the book is about how the paralysis in Congress has created a leadership vacuum and metropolitan regions are stepping up to fill the void. Los Angeles has already been called out by Brookings for its leadership with the Measure R sales tax for transportation. Last year Brookings cited former Mayor Villaraigosa’s “bottoms up federalist approach” as one of the “Top 10 Metropolitan Innovations to Watch” – “bottoms up” because he encouraged the federal government to provide incentives for local governments, voters, corporate, civic, labor and environmental leaders to step up and help themselves.

There have been two excellent columns in the NYT about the book: “The Power Inversion,” by David Brooks, and most recently, “I Want to Be a Mayor,” by Thomas Friedman. Very briefly, Brooks says the country is segmenting into divergent city-states that are driving innovation with transformational agendas. He notes that the number of patents per capita increases by roughly 20-30 percent for every doubling of employment density -- in other words innovation isn’t coming from suburban office parks but from cities where "large, loose networks of researchers are brought together in physical proximity."

“The happiest people these days are those who leave Washington and get elected mayor or governor,” Brooks writes. “The most frustrated people are people who were mayor and governor and get elected to the Senate. They end each day knowing they were busy. They’re just not sure they accomplished anything.”

Friedman picks up the beat in his column. “If you want to be an optimist about America today, stand on your head,” he writes. “The country looks so much better from the bottom up – from its major metropolitan areas – than from the top down. Washington is tied in knots by Republican-led hyperpartisanship, lobbyists and budget constraints. Ditto most state legislatures. So the great laboratories and engines of our economy are now our cities."

Friedman says that in an interview the authors again called out Los Angeles for putting up tax dollars for large-scale transit investments and for leading the modernization of ports, airports and freight rail. “D’s and R’s will work together locally, unlike in their statehouse or Congress,” Friedman writes, paraphrasing the authors, because how they feel about the place where they live and work “is much stronger than how they feel about their party.”