Measure M Projects Including Eco Rapid Transit Could Be Accelerated! 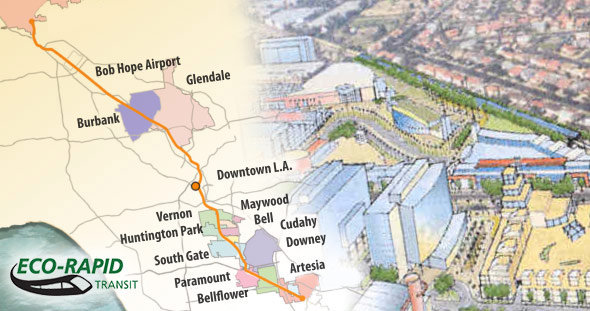 Very big news from LA Metro yesterday: The agency has received several unsolicited proposals for "public private partnerships" or "P3s" to design, build, finance and help accelerate some of the major projects that would be built if voters approve Measure M on Nov. 8.

These include two proposals to accelerate the West Santa Ana Branch Light Rail project, also known as the Eco Rapid Transit Line, which would run along an abandoned Union Pacific Railroad ROW from Artesia north through several southeast cities and then along the west side of the Los Angeles River to downtown LA, with plans to eventually extend it to the Bob Hope Airport and even further north. Cities along the corridor have voted to oppose Measure M because they believe the construction of this line is unfairly late in the project implementation schedule.

One proposal to design-build-finance and accelerate this line comes from Skanska, an affiliate of a Swedish firm that has offices in Riverside, which built the Exposition Light Rail Line, and is now building the Regional Connector in downtown LA and the first phase of the Westside Subway Purple Line Extension. Skanska has also submitted a proposal to accelerate the Purple Line Subway Extension to UCLA and the Veterans Administration.

Another proposal to design-build-finance and accelerate the Eco Rapid Transit Line comes from ACS, based in Madrid and one of the leading construction companies in the world, which is currently working on stretches of California's high-speed rail line and the Crosslinx light rail line in Toronto, Canada.

The fact that there are two competing proposals makes it more likely that there will be serious acceleration of the Eco Rapid Transit Line.

Another proposal, from Parker Infrastructure Partners, has already moved through the unsolicited proposal review process into the detailed proposal phase and while its contents are confidential Metro says “the approach offers a chance to deliver multiple Measure M projects sooner than anticipated." Parker Infrastructure Partners was founded by Jeffrey Parker, a member of the Investment Committee of IST3 Infrastruktur Global, a Zurich-based brownfield infrastructure fund formed by a consortium of Swiss pension funds. He was previously a senior managing director of Ernst & Young Infrastructure Advisors and has advised public agencies on more than $15 billion in infrastructure investment including Denver’s massive T-REX freeway reconstruction and light rail extension and BART’s Oakland Airport Connector.

What this means is that Metro may have found private sector partners that can finance Measure M projects, including Eco-Rapid Transit Line, so that they can be built more quickly and provide the benefits (less traffic, more jobs, an even more robust economy) sooner.

“This is exactly what we were hoping for when we put out our call to the industry last February to be our partners in innovation,” said Metro CEO Phillip A. Washington. “We are now seeing how the private sector responds when we empower them to do what they do best – optimize project delivery.”

Washington came to LA Metro from the Denver Rapid Transit District, where he was known for using alternative funding and financing sources to accelerate transit projects and for launching the first “P3” in this country to build rail lines in Denver.

Metro Chief Innovation Officer Joshua Schank said that the agency has received nearly 50 proposals so far under its new “unsolicited proposal policy.” Other candidates for acceleration include the Crenshaw Northern Extension to West Hollywood and Hollywood, the Sepulveda Pass Transit Corridor, and the 710 South Corridor, where a clean-truck-only lane proposal is being considered.