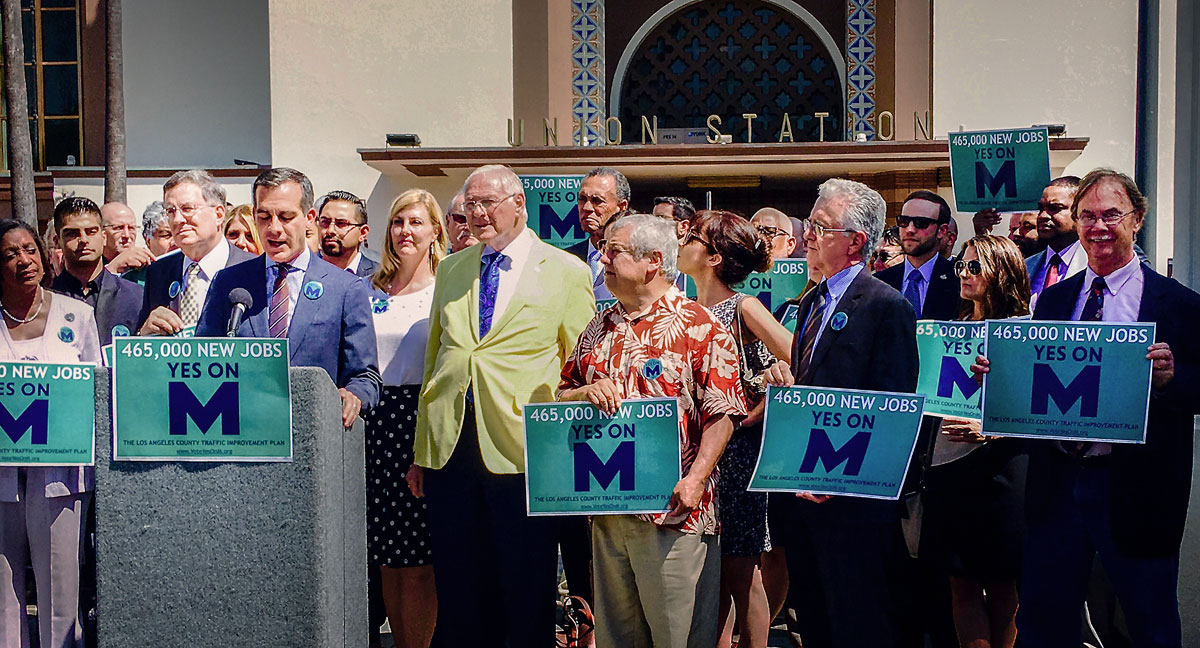 At the launch of the Measure M campaign in honor of Labor Day and in front of Union Station in the blazing heat (climate change?), Tracy Hernandez of BizFed (the massive countywide alliance of 272,000 businesses) said it best: "This crazy cast of characters does not stand together all that often. But we stand together for Measure M." Next up was LA City Councilmember Mike Bonin, who observed: "We've got more speakers than rail lines!" (Note a very happy Move LA ED Denny Zane to the right!) There were some other good one-liner campaign slogans . . .

Other good one-liners:
LA Mayor Eric Garcetti: Measure M stands for middle-class because it will create 465,000 good middle class jobs.
Duarte City Councilmember and Metro Board Chair John Fasana: Measure M will build a clean transportation system to address climate change.
LA County Supervisor and Metro Boardmember Michael Antonovich: The process for deciding what was included in Measure M was bottoms-up — not top down.
Tom Sayles, vice chair of the LA Area Chamber of Commerce: The chamber cares about 3 things: job creation, job creation, job creation. And also about how to get to those jobs.
Ron Miller, Executive Secretary of the LA/OC Building & Construction Trades Council: Measure M would be the single largest job stimulator that LA County has ever seen, and these would be good jobs that prove that college isn't the only way for young people to get into the middle class.
LA City Councilmember Paul Krekorian: Measure M will transform transportation in the San Fernando Valley with north-sound and east-west rail corridors, connecting the San Fernando Valley with the San Gabriel Valley and the Westside — all for the price per person of just one cup of Starbucks coffee or one Big Mac per month! And we can build a better future for our children even as we build a rail system.