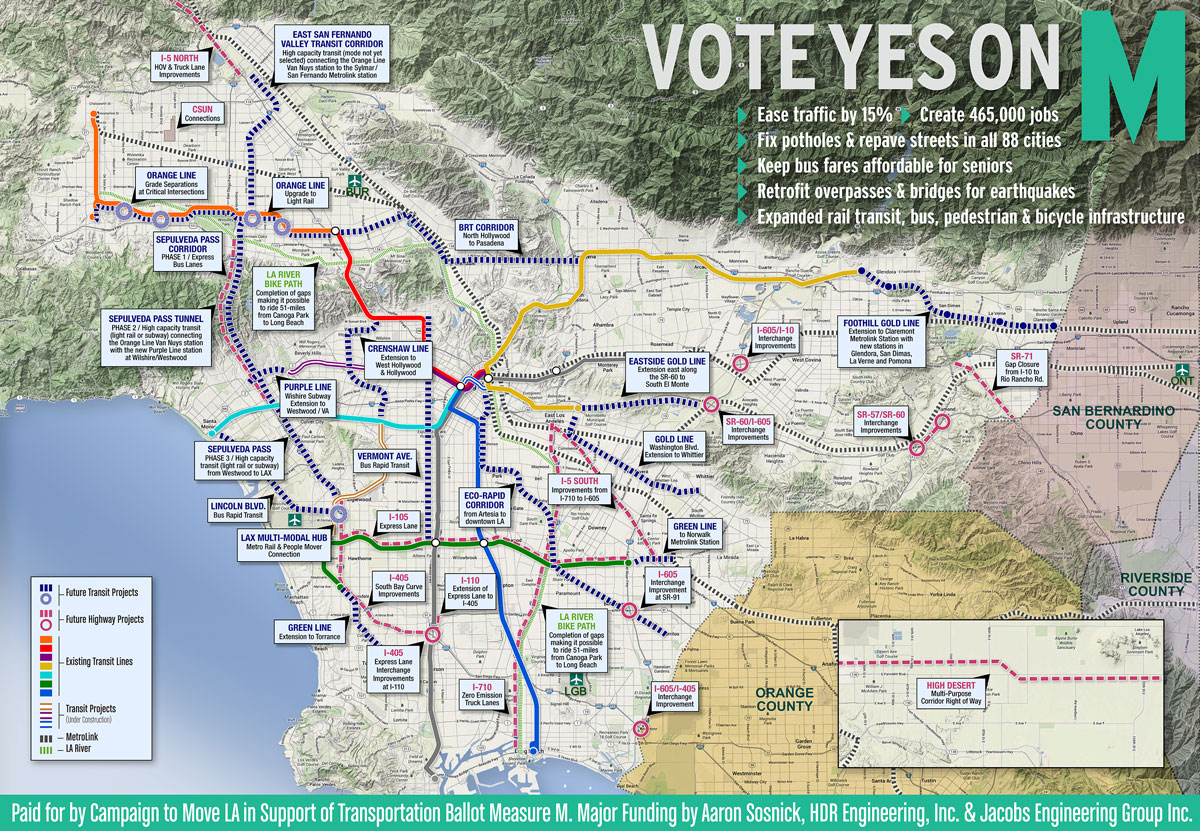 Measure M would dramatically improve our transportation system and redefine commutes for residents in every corner of LA County to get us where we want to go, when we want to get there, however we choose to travel—whether by train, bus, car, bike or on foot. Not only will there be more rail and bus lines and connections between them, there will also be more connections that make it easier to get to rail stations and bus stops on bike and on foot. Measure M will even close gaps to create a continuous 51-mile bike path along the LA River!

This is such a basic and necessary improvement to LA County that it has won endorsements from business, labor, environmentalists, AARP, the American Heart Association, and educational, faith-based, political and community groups. The endorsement list includes 100 organizations and continues to grow. You can see all the endorsers at http://www.movela.org/endorse.

Why the enthusiasm when the LA County ballot is already crowded with propositions and measures competing for voters’ attention? Because LA County residents need alternatives to sitting in “soul-crushing, air-polluting traffic,” as the LA Times put it in their endorsement. LA County was built up around an extensive network of streetcar lines and grew into a sprawling metropolis along an even more extensive network of freeways—but we need something more as LA County’s population continues to grow.

The projects that would be built were selected through a 3-year process involving LA County’s 88 cities, 6 subregional Councils of Governments, stakeholder groups from across LA County, and by the nearly 48,000 people who participated in telephone town halls and in-person meetings at LA Metro—surely one of the most ambitious outreach and engagement efforts ever around a transportation plan.

Every major freeway would be improved, including fixes to the I-5, I-10, I-105, I-405, I-605, I-710 (south and not north), SR 14, SR 57, SR 60, SR 71. Transit projects would include a completed Metro connection to LAX; a Sepulveda Pass Transit Corridor from the Orange Line in the San Fernando Valley to the Expo Line and LAX; a light rail along Van Nuys Boulevard in the San Fernando Valley; extensions of the Foothill Gold Line to Claremont and the Eastside Gold Line to South El Monte and Whittier; an extension of the Green Line to Torrance; construction of the West Santa Ana Corridor/Eco Rapid Transit light rail line from Artesia to downtown Los Angeles; an extension of the Crenshaw Line to the Wilshire Subway, West Hollywood and Hollywood; and conversion of the Orange Bus Rapid Transit Line in the San Fernando Valley to light rail.

In addition, all 88 cities and unincorporated areas in LA County would ease traffic immediately by repairing potholes and repaving local streets and roads.

Aside from easing traffic congestion there’s another benefit that accrues from Measure M—465,000 good, middle-class jobs negotiated with Project Labor Agreements and a Construction Careers Policy at LA Metro. And if all of this isn’t compelling enough, there’s more: LA Metro has received a number of unsolicited proposals for public private partnerships or P3s, which offer the opportunity to accelerate several of Measure M projects so we get more traffic relief sooner.

The only problem is that California’s ballot is long. So have a cup of coffee before going to the polls and look for Measure M near the end of the ballot! There’s more information about Measure M here: http://www.movela.org/measure_m_materials