We have much to be thankful for this holiday season: Measure ULA, a voter initiative to raise up to $900 million annually to invest in strategies to reduce and prevent homelessness and build affordable housing in the City of Los Angeles was approved by voters by a wide margin.

It has been an incredible journey that began nearly three years ago when Move LA Founder and Executive Director Denny Zane and Eli Lipmen, who became our new executive director in July 2022, brought together advocates for affordable housing, tenants' rights and the homeless, leaders of organized labor, and academics at the UNITE HERE Local 11 office in downtown LA. That's when a discussion began about how to address the great need to prevent homelessness and build more affordable housing, and about the possibility of creating a voter initiative to fund this effort. 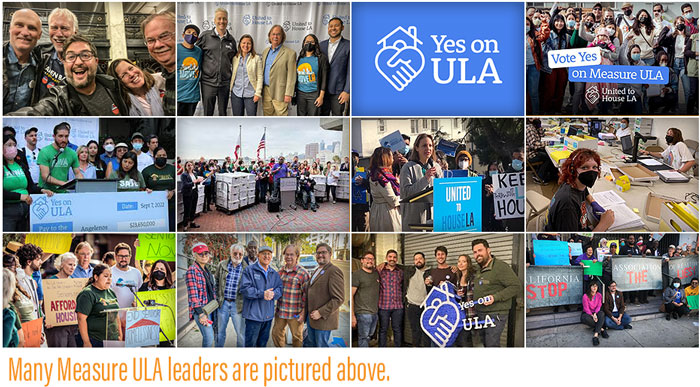 The ballot measure was Denny's idea—affordable housing is an issue he cares deeply about and he had been working on a similar measure in Santa Monica (which was also passed by voters) where he lives. He realized the impact would be much greater in a city the size of LA, however, and he wanted to alert advocates to what might be a one-time opportunity: Because of California court decisions a voter initiative to raise taxes would now require only a simple majority vote rather than a two-thirds vote. He feared that this rule could be changed soon.

Denny's initial idea had been to tax windfall rents from high-rent units, but his long-time friends Peter Dreier from Occidental College and Jan Breidenbach from USC, who had significant experience in this area, deemed it unworkable. But two other options emerged: 1) a tax on gross receipts for high-rent apartment buildings and 2) a real estate transfer tax.

Denny was then able to gather the data necessary to create revenue projections for each option and to raise the funding needed for polling. The transfer tax raised the most money and polled the best. The early discussion group was reconvened and a steering committee, executive committee, and a drafting committee, as well as other committees, were formed.

We worked with Joe Donlin of SAJE, Brady Collins of KIWA, and Scarlett De Leon of ACT-LA on outreach and coalition building. Jackson Loop of SCANPH, Peter Dreier of Occidental College, Joan Ling and Shane Phillips of UCLA led research efforts. Anne-Marie Otey of the Building Trades and Allison Vu of ACT-LA coordinated communication efforts while Marisa Garcia of Move LA coordinated the planning and operation of phone banks.

That was the beginning of Measure ULA.

Having worked very hard on this measure ever since that fateful day in 2019 when a room full of people who were interested gathered at UNITE HERE, we were overjoyed to find that Los Angeles voters agreed with us! Our citizens' initiative will raise up to $900 million a year by taxing those who are selling property for $5 million or more, and the money will be spent on:

In order to succeed this coalition built a movement of more than 230 organizations with the most incredible and passionate leadership who helped us create the momentum and the following we needed to win!

Special thanks to Chris Hannan of the Building Trades for his fantastic efforts to raise funds for the signature drive and the campaign and to Frances Engler and Danielle Wilson from Unite HERE Local 11 for their signature gathering efforts to ensure success in qualifying the measure for the ballot.

We thank them all for their work in mobilizing an army of volunteers.

Thank you as well to our campaign manager Yuval Yossefy, and the consultants who helped our effort succeed.

This will be our victory, together, for a more equitable and affordable City of Los Angeles.

In the words of our ULA team members on Instagram:

We are so humbled by everyone who joined this effort, who called strangers to advocate for Measure ULA, who knocked on doors, who made signs, who educated their friends and families, and who helped make this effort so successful.

Exhale. Celebrate. Hug your neighbors. We did it 👏👏👏

This is a massive deal, and we’re not done yet.

You can read more about our efforts to create and win Measure ULA below:

And a more recent LA Times story on the importance of this measure for Mayor Karen Bass.