Measure M Is for Our Kids 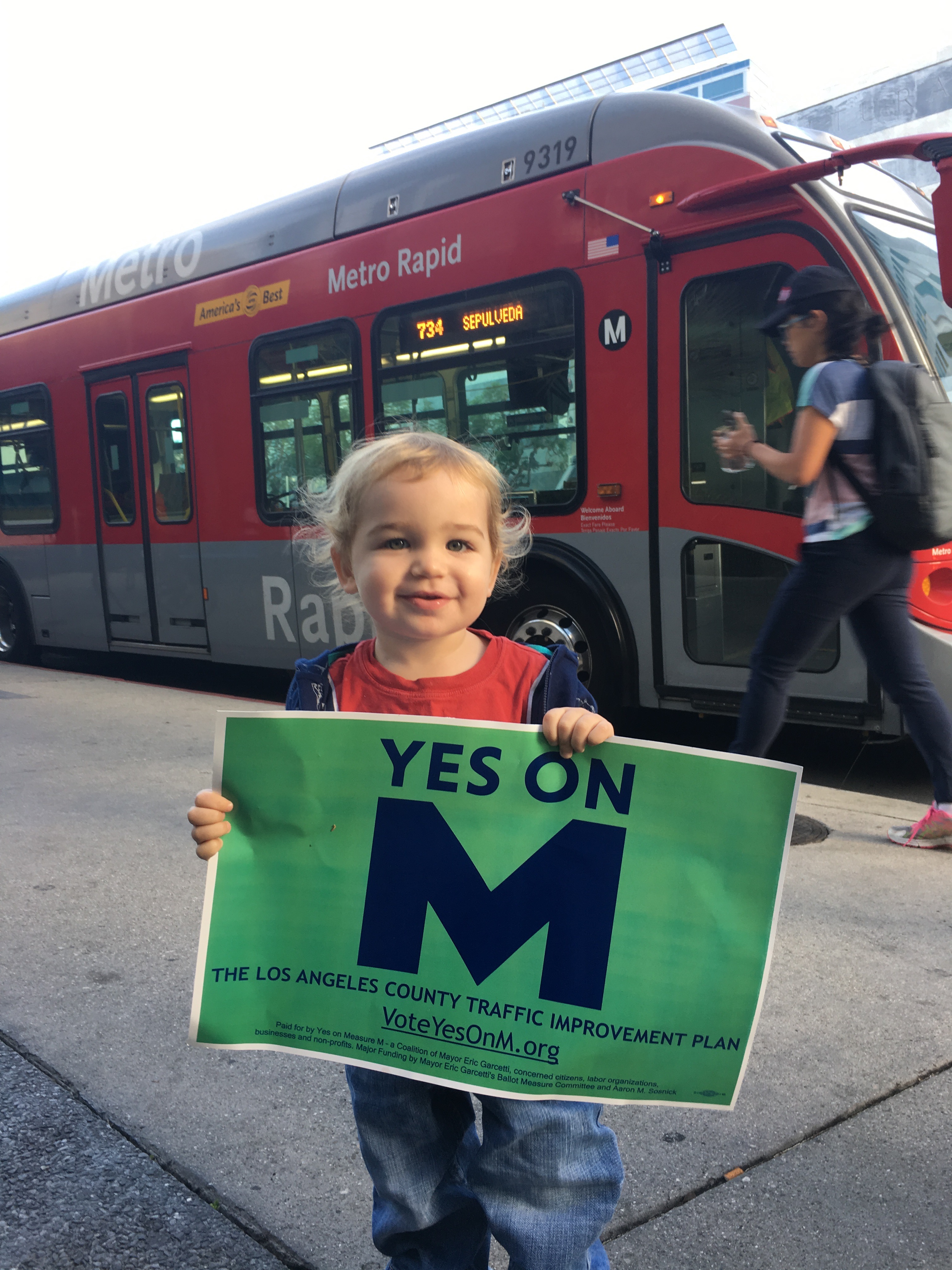 I have been excitedly talking about Measure M with friends and family ever since it was announced as the ballot initiative for traffic reduction in LA County. While almost everyone is supportive, a few people have candidly told me that they believe they will never see the benefits of Measure M in their lifetime.

I get what they are saying. Project completion dates like 2029 and beyond seem far away, even for someone in their early thirties.

In reality, however, the "local return" funding that will be provided to all 88 cities in LA County will mean immediate road repairs, and recently announced public-private partnership agreements would accelerate major projects. While this answer addresses their concern, it isn’t the best answer. You see, Measure M is actually about my children because my kids love public transit.

Every time my 18 month sees a train, he goes “choo-choo.” My daughter once commented that the opening of the Expo Line near our house was “a beautiful thing.” The sense of sheer joy that they get from riding Metro to their favorite museum or down to the beach is just amazing.

I want my kids to be able to live, work, and play in Los Angeles. And the only way that can happen is with a world-class public transportation system. That is why I am voting for Measure M.

And I am not alone. My friend Houman is voting for Measure M for his one-year-old daughter. He is a conservative when it comes to economic issues. But for him, investment in public transit is critical for Los Angeles to continue to be a world-class city.  So he is voting for Measure M so that his daughter will have the opportunity that he doesn’t have.

My friend Antonio works for a local construction union whose members have high road career paths and get good paying jobs with great benefits when construction companies hire local workers for mass transit projects. He has a one-year-old daughter and wants to know that his members will be able to earn a good living in Los Angeles—both with fulfilling, well-paid work, and the ability to commute to and from his destination.

Sam is a Century City lawyer who decided to ditch his second car and now walks, take ride shares, or uses public transportation. In fact, he inspired me to do the same just a few months ago. He has two daughters, and he doesn’t want them to be dependent on a single-occupancy vehicle when they grow up. He wants them to be able to walk or bike safely on the streets and be able to get where they need to go without owning a car, either…not just because of the huge insurance savings but it is healthy and more environmentally friendly.

All of these friends want Los Angeles to be a place where they can live, work, and play. But more than that, they want it to be a place for their kids to enjoy, too. And all of them are voting for Measure M because it isn’t about when it will be completed but who it is for—our kids.