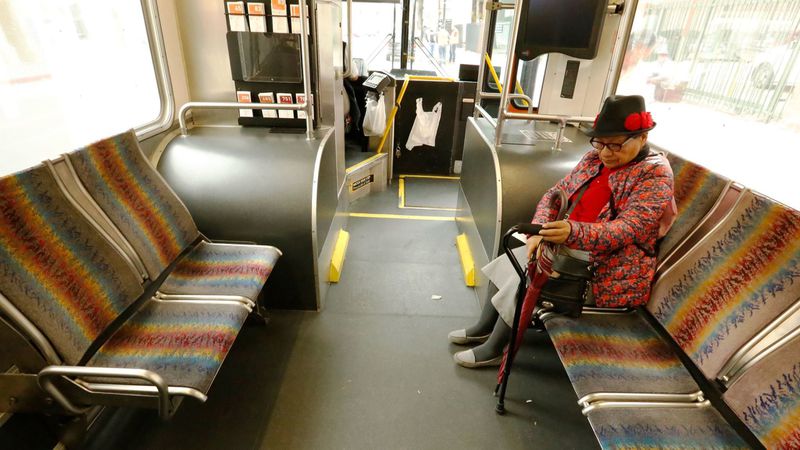 Since last month at the Metro Board meeting on its budget, where we testified that Metro needs to budget for expanding bus service, several news outlets have called Move LA to ask us why we believe bus transit ridership continues to fall in Los Angeles County.

Our answer:  since Metro’s primary ridership base is the low-income members of our community, declining bus ridership and rising homelessness have the same fundamental cause – the loss of a large share of Los Angeles’ County’s affordable housing stock, not to bulldozers, but to rent increases and eviction notices.

Increasingly, very-low and low income people and families are no longer able to afford to live here.  Many leave the county for more affordable communities to our east or communities in other states;  some end up on the streets among the growing ranks of our homeless population.

In any case a large share of Metro’s very-low and low income transit rider base have left and are no longer riding transit.

We began to unearth this trend last year when we looked at demographic data we asked for and received from the Southern California Association of Governments (SCAG).

Since 2005, Los Angeles County has experienced two dominant trends: a dramatic increase in households with six-figure incomes and a concurrent and dramatic loss in very-low and low income households.

We believe this sudden and very large increase in our high-income workforce, primarily in high-tech industries, has created pressures on housing costs across the county, both for-sale and rental housing, driving up rents, gentrifying neighborhoods and displacing many low-income residents.

Many displaced low-income residents have moved out of town; some may have become homeless. Many members of the displaced households were likely transit riders. Thus, between 2005-2015, LA Metro lost nearly 17% of the population that provided its ridership base, largely due to rising housing costs. This loss of low-income households has continued and probably now exceeds 20% since 2005.

It is no surprise then that, in addition to riders lost in the aftermath of fare increases and service cuts in 2010 and 2014, Metro transit ridership declined another 17% after 2015.

It’s not just LA County.  In 2018, Beacon Economics in a report done for Next 10 said that essentially the same process was underway in urban areas throughout California.

We have been sharing this information with key leaders--at Metro, SCAG, and at our Annual Transportation Conversation. The news media took note and Elijah Chiland wrote an article for Curbed LA that supported our conclusion with further data. And then we were interviewed for KNX 1070 News Radio, the largest news radio outlet in Los Angeles, about the decline in ridership caused by demographic shifts and housing costs and what Metro can do today to invest in our current ridership and not just our future.

We believe that the Metro Board has been incredibly ambitious with its “28 by ‘28” proposal to complete 28 major capital projects by 2028 when the Olympics. This is ambition we encourage, with one caveat: we want Metro to add one more ambitious plan: We should rebuild our transit ridership back to 2008 levels by 2028.

We believe there are cost-effective, proven strategies that include significant bus service enhancements, real fare reductions, universal student transit pass programs available to all college students in the county, and additional access for services to seniors and people with disabilities.

Further, Metro should prioritize (like Barcelona, Spain has done) developing a significant network of Bus Rapid Transit lines on boulevards throughout the county.  There is already funding in Measure M for this and we believe it would be an excellent use of that measure’s new transit operations dollars.

Joe Linton of Streetsblog LA outlined our concerns with the FY 2019-20 Metro Budget and our recommendations for expenditures in this detailed story.

We've outlined our asks to the Metro Board and would like to get your support. Can you sign onto this letter endorsing our recommendations today and we will share it with the Metro Board?

Oh, and what is our approach to the affordable housing crisis?  More on that next time.