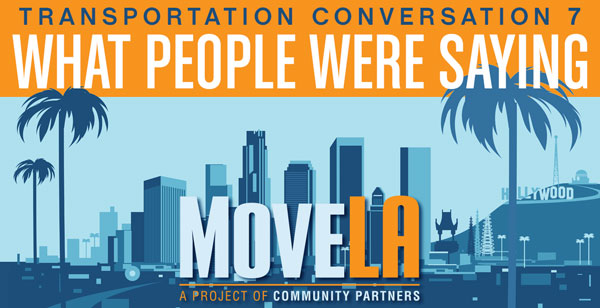 There are about 500,000 students attending community colleges and state universities in LA County and if we add in other colleges the number of students increases to about 700,000. LA County has the largest community college district in America. What would it take to get these students to vote for the proposed Measure R2 sales tax for transportation? Economic justice and jobs.

These students come from the poorest neighborhoods in America. They commute sometimes as much as 30 hours a week just to get to school. 75% of them work at least part-time and aren’t able to carry a full load of credits. Measure R2 could hit them in their pocketbooks [with a universal student transit pass] and offer to take 90% off the cost of their commute from home to work to school and back home again. Next we have to show them there’s a light at the end of the tunnel because Metro can offer them internships, summer jobs and permanent jobs.

How do we get 250 students to the polls? We bring the polls to them. Next year will be the first time that we could have same-day voter registration at college campuses in California. [Ed note: A law making same day voting legal will go into effect in 2016.] That means you could register at 9 a.m., and a half hour later vote for Measure R2. Let me make a motion right here and now to ask the LA County Registrar of Voters to put polling places on community college campuses in LA County. Everybody in favor say “Yes!” [Resounding chorus of yesses from the audience.] The motion passes! And so does Measure R2!

Added LaMont Jackson: “I know my constituents want student transit passes because not only do they have to get to school but in order to get the classes they want they often have to travel between 3 or 4 different campuses.”