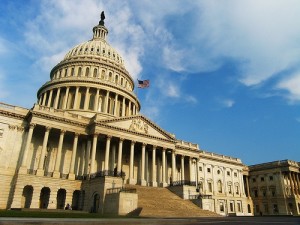 Move LA is going to Washington DC for the LA Chamber of Commerce’s annual “Los Angeles on the Hill" event, and funding transportation is once again the key topic for many of the 175 people in attendance. There's a briefing at the White House and meetings with US Transportation Secretary Ray LaHood and California Senators Barbara Boxer and Dianne Feinstein, and with Senator Max Baucus (D-MT, head of Senate Finance), Senator Orrin Hatch (R-UT, ranking member of Senate Finance), and U.S. Rep. Janice Hahn (D-CA, on House Committee on Transportation and Infrastructure Subcommittee)— all of whom could play a role in advancing the America Fast Forward bond program, which gives LA another shot at accelerating construction of its transit program.

THE BOND PROGRAM WAS ALWAYS PLAN A
The bond program was always Plan A for moving forward. These qualified tax-credit bonds could be issued by state, local or other eligible issuers — in this case LA County and LA Metro — and the federal government would subsidize 70 to 100 percent of the interest by granting investors annual tax credits in lieu of interest payments. The bond program would be authorized in the amount of $4.5 billion annually from 2013-2023 for a total of $45 billion, with a cost to the federal government of about $7.5 billion.

JOBS, LOW INTEREST RATES, LOW CONSTRUCTION COSTS, HIGH UNEMPLOYMENT
The goal, besides accelerating construction, is to help create private sector jobs by borrowing capital on favorable terms — doing it now takes advantage of historically competitive pricing on construction projects, low interest rates and high unemployment. The bond program is projected to create more than 500,000 jobs nationally and would serve as an important incentive for states, cities and transportation agencies to invest their own funds — as LA County is doing with the proceeds of the Measure R sales tax for transportation — in the construction of major transportation infrastructure projects.

Dr. Mark Zandi, chief economist for Moody’s Analytics, puts it this way in LA Metro’s America Fast Forward bond brochure: “Arguably nothing the government spends money on produces a higher long-run return than infrastructure (except perhaps defense). Nearly any infrastructure project seriously being considered today will return more than the 2% the U.S. Treasury is paying on 10-year bonds. As with any business that borrows to invest in machine tools or computers, or a household that borrows to purchase a home or car, it makes sense for government to borrow to invest in an infrastructure asset that will provide returns for years.”

A SMART LENDER NOT JUST A BIG SPENDER
Federal financing — and not just funding — of transportation projects is especially critical at this juncture because the Highway Trust Fund is running out of money. Trust Fund revenues have dwindled to the point that it has been kept solvent only through large infusions of revenue from the General Fund — $8 billion in 2008, $7 billion in 2009, and $19.5 billion in 2010. This is in part because the gas tax, which is the fund’s revenue source, was fixed at 18.4 cents per gallon in 1993, the last time it was raised, and because cars have become more fuel efficient and people are driving less. The number of miles traveled per capita has been in decline for eight straight years. In this period of declining per capita VMT total VMT has declined three years and increased five — because of population growth — for a net decrease of 0.9%.

The issue of how to address the problem of declining revenues will be a focus again this year because Congress will be once again be taking up reauthorization of the federal transportation bill. Last year the federal bill, MAP-21, was reauthorized as a 2-year bill instead of a 6-year bill, which is normal, because Congress could not reach agreement — the bill had to be extended 12 times.

INCENTIVIZE LOCAL FUNDS TO MAKE UP FOR LACK OF FEDERAL FUNDS
It is believed that the America Fast Forward bonds would be a major boon to the growth of public-private partnerships in the U.S. and that the program's business-oriented approach could attract bipartisan support. Like the TIFIA low-interest loan program that Congress approved in MAP-21 last year, the bond program would help stretch federal dollars by providing incentives that stimulate and leverage local sources of funds to make up for declining federal sources.

It is hoped that the bonds would be a major boon to the growth of public-private partnerships in the U.S. and that the program’s business-oriented approach could attract bipartisan support. A key figure in advancing the AFF bonds will be U.S. Rep. Bill Shuster (R-PA), who is in his first few months as chair of the House Committee on Transportation and Infrastructure.