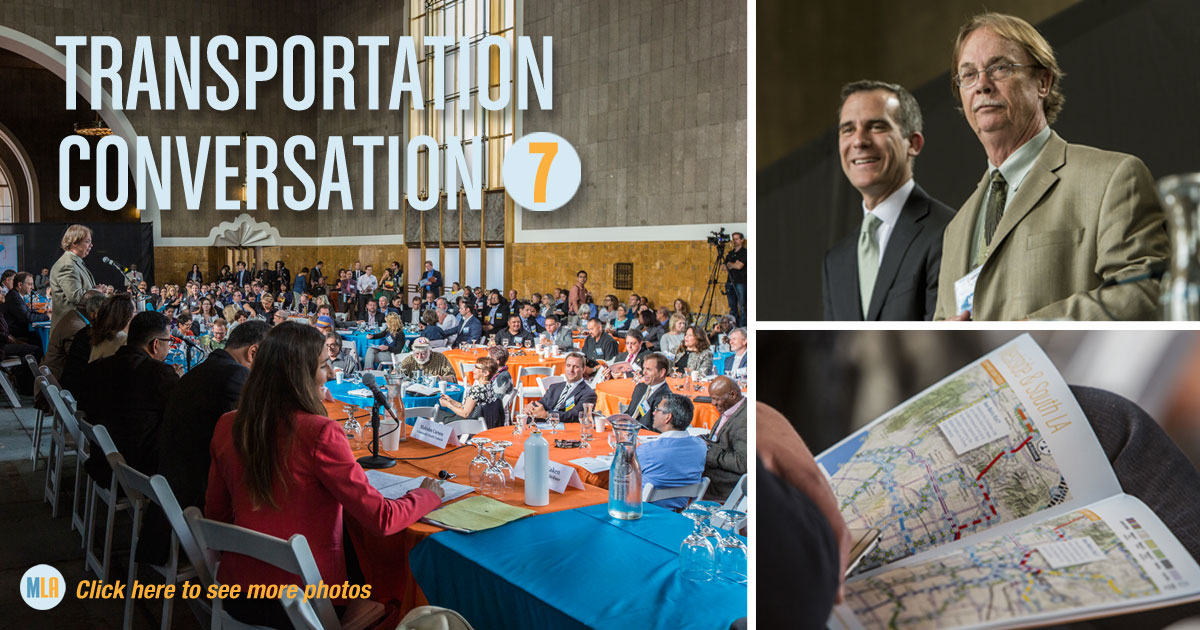 Attempting the impossible in 2007
This organizing effort led Denny into a decade of public service on the Santa Monica City Council, including 2 years as mayor, where he worked on many of the issues he cares most about — affordable housing, clean air, the revitalization of downtown Santa Monica as pedestrian and transit-oriented mixed-use and mixed-income place, and a regional airport plan making it possible for all corners of the region to share the economic development potential—and traffic burden—of hosting an airport. Then, in 2007, he decided to attempt the impossible: to pull together a coalition of city and county leaders with the goal of fixing LA’s traffic intractable traffic problem.

Convening the classic green-blue-green coalition
He deemed transit to be the most important part of the solution, and created the nonprofit Move LA to convene what became a powerful business-labor-environmental coalition that teamed up with LA Mayor Antonio Villaraigosa to put the Measure R half-cent sales tax on the 2008 ballot. This was a dark time, the threat of a Great Recession bringing the economy down in LA as across the nation. But the coalition was undaunted, voters were willing to tax themselves to improve our transportation system, and the ballot measure was successful—winning 67.9% of the required 66.7% supermajority vote.

Measure R: antidote to the recession
Measure R was in fact an antidote to the Great Recession, and played an important role in bringing LA County back from the brink by providing billions of dollars for near-term investment in transportation and a total investment of $36 billion over three decades.

Measure M: even more important
Measure M could be even more important for the local economy because together with Measure R it would provide for 40 or 50 years of work not just on construction of our transit system but also on the operation and maintenance of that system. These public investments help stabilize the economy through recessions. And these jobs are particularly important because Southern California is not a manufacturing center anymore—there are no car manufacturers or steel plants, and vocational education has taken a hit.

Dramatically expanded coalition
Move LA has continued to convene the coalition every year for a grand “Annual Transportation Conversation” staged in Union Station, the “Cathedral of Public Transportation,” whenever possible. At this event coalition—which LA Mayor Eric Garcetti has joked feature the biggest conference panels ever—members come to consensus on priorities and positions. Since 2008 this mighty coalition has been dramatically expanded with the addition of faith-based groups, older adults, people with disabilities, and students. Measure J in 2012 lost by just 15,000 votes—just 0.5% of the total needed—and these new constituencies could easily provide that “margin of victory” for Measure M.

Keeping constituencies and coalition moving forward
Eight years have passed since the passage of Measure R, and of the 13 elected officials who served on the Metro board then only 2 remain now who supported Measure R—Metro Board Chair and Duarte City Councilman John Fasana and Glendale Mayor Ara Najarian. We believe our biggest contribution has been to help keep the constituencies and the coalition moving forward and the dream of a transformational transportation system alive! Measure M is the fulfillment of this dream of modernizing and diversifying LA’s transportation system, to become the 2nd largest transit system in the nation.