Support the North San Fernando Valley BRT Project Oct. 24 at the Metro Board!

Move LA is urging the Metro Board to move forward with the North San Fernando Valley Bus Rapid Transit (BRT) Project, and we are asking you to join us in this effort by sending an email to board members—their email addresses and more info is below—to express your support. Or consider attending the Metro Board meeting on Thursday, Oct. 24, at 10 a.m. If you want to provide public comment you need to register at the meeting before the item is taken up. 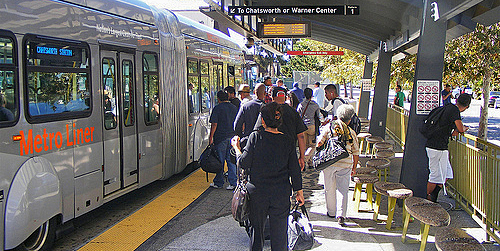 This BRT project represents a $180 million investment in the North San Fernando Valley, and is projected to result in an estimated 28,000 daily boardings in 2042—comparable to the highly successful Orange Line BRT today—in part because it will directly serve students, faculty and staff at Cal State Northridge, one of the largest universities in the state. But it will also serve key work centers including North Hollywood, Panorama City and the Northridge Fashion Center, and allow people to transfer to the Orange Line, Metrolink and the planned Van Nuys Boulevard Light Rail line.

Everyone—especially low-income residents—will benefit from faster transit service that reduces both traffic congestion and the time they have to spend getting to destinations. Traffic in Los Angeles is slowing down buses, making arrival times unpredictable and reducing ridership. One recent study, by Aaron Mendelson at KPCC, found that while 22% of Metro buses now run late, buses that travel on a dedicated lane, like the Orange Line, are late only 5.4% of the time. On-time performance matters greatly to bus riders, and dedicated lanes for BRT would really improve the reliability of service.

Consider some of the results of research that has been done on BRT systems in the U.S. by the Federal Transit Administration, the Transportation Research Board and others.

Consider some of the results of research that has been done on BRT systems in the U.S. by the Federal Transit Administration, the Transportation Research Board and others:

Remember that the transportation sector is the largest emitter of greenhouse gases in California (40%, or 50% if refinery emissions are included). There’s strong evidence that climate change is resulting in longer, hotter, drier summers that are increasing the frequency of wildfires and the length of the fire season—environmental impacts that have been felt in the San Fernando Valley.

Support Metro’s planned $180 investment in the North San Fernando Valley. With LA County traffic as difficult as it is, and climate change already being felt, we need to reduce GHG emissions and provide more travel options now! Please call board members to register your support. The Metro Board Members are:

Thank you for supporting transit!